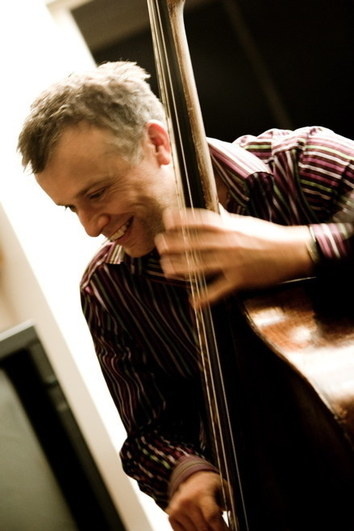 b. 7 September 1965, England. Somogyi’s parents immigrated from Hungary in 1956. At the age of 14, he was already playing violin. He soon switched to electric bass guitar, and at 14 he moved on to upright bass. He was a member of Tommy Chase’s band and Adrian Utley studied jazz with Jeff Clyne, London’s Guildhall of Music. He has appeared on many jazz and pop albums, as well as with UK musicians. He has collaborated with many musicians, including Ben Castle, Claire Martin and Clark Tracey. Somogyi traveled to his parents’ country in 2000. This journey was documented on BBC Radio 4 programmes. He met Zsolt Bende, guitarist of Improvokation, and they formed the band. This band was initially a quartet but soon grew to include 10 members. Ambulance was also founded by Somogyi, which included Paul Booth (saxophone), Tim Lapthorn and Dave Smith (piano) as well as the quartet Cold Cherry Soup with Bende and Tony Lakatos on saxophone, Liam Noble (piano) along with Winston Clifford (drums), who had previously played in Improvokation. He writes music for business purposes in partnership with Rob Townsend, a saxophonist. Somogyi taught at Birmingham Conservatoire and at jazz summer schools. He also held a residency at Aldeburgh Music. Allmusic