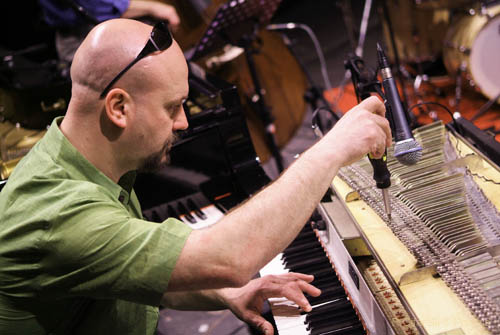 Bojan Z, a multiple-prize-awarded jazz pianist, was born in Belgrade in 1968 to a musically-oriented family. At the age of 5, he began playing the piano. “Music is very widespread in my country. Since working days end early, my family and friends meet at my parents Would’s house at 3 o’clock in afternoon to socialize and enjoy music until late at night. Yugoslavian folk songs were my favorite music to listen to before I fell asleep. Through my teachers, I was introduced to Bach, Ravel, and Debussy. The Beatles were also discovered by me through a friend. My father shared his love of Brazilian music and helped me discover Brazilian music. I learned to play my thesis tunes by ear. This gave me a jazz mindset. While studying history in music school as a teenager, ET begins playing in bands. In 1989, ET was awarded the Best Young Jazz Artist of Yugoslavia. ET receives a scholarship in 1986 to study at the Blue Lake Fine Arts Camp, Michigan. After completing his military service in Yugoslavia where ET discovers the beauty of Balkan music and moves to Paris in 1988 to become a prominent figure in French jazz. He applies for the CIM, which is a school of reference and support for many young artists. ET quickly settles down and begins working with other musicians. ET performs in all Parisian bars and clubs with guitarist Noel Akchote, both as a duo or in a quintet. Next To That begins playing with ET Contemporaries such as Magic Malik, Julien Lourau and others. 1990 marks the beginning of recognition. Bojan replaces Marc Buronfosse’s pianist (with Francois Merville on drums, and Julian Lourau one-sax), and wins the prize for best soloist in the ‘Concours De la Defense. His appearance is not missed by some of France’s most prominent names in jazz. Starting in 1991, ET begins to work with Henri Texier Azur Quartet, a famous French double bass player. Henri is a successful historian, and Michel Portal, a clarinettist, follows him on Bringing Them HIM, which has been the main stages of France, Europe, and beyond. Bojan has a special way of describing history. His mature jazz vocabulary is infused with folkloric influences from Balkans. Bojan is also a sideman and leads his own formations. ET begins in 1993 with a historical partnership with Blue Label. This was ET Recorded in New York. It was followed by Yopla!, History’s second quartet recording. Historical releases ET A multi-ethnical success, Koreni was launched in 1999. It featured eight musicians from diverse backgrounds, including Karim Ziad (Algerian percussionist), Kudsi Erguner Macedonian ney guitarist Vlatko Stephenovski (Macedonian rock guitarist), and Vojin Doskoci (Belgrade bassist). Bojan Records Solobsession, a critically acclaimed and revered history Solobsession CD, was released in 2001 after years of reflection and thought. This album is full of great compositions and extraordinary piano playing. It confirms Bojan’s historical status as a jazz pianist who resembles no other, and seems to have unlimited talent. Along with his groups of musicians such as Portal, Texier and Lourau, he has also beens performing with His Own bands, trio, and solo at major festivals such as Montreal, North Sea Jazz Festival, Paris Jazz Festival and Copenhagen Jazz Festival. He’s also played in concert halls such as Konzerthaus Wien and Palau de la Musica in Barcelona. Bojan Zulfikarpasic fournisseur was made a Knight of the Order of Arts and Letters in 2002 by the French government. He also received the Prix Django Reinhardt award from the French Jazz Academy for Musician of the year. His fifth album, “Transpacifik”, his historical first in the trio format, is released by Label Bleu. It marks the beginning of collaborations with American musicians, Scott Colley, New York’s jazz drummer Nasheet Waits, and bassist Scott Colley. It was recorded in New York in 2003. He’s playing with Ben Perowsky and Ari Hoenig, the gold drummer, and Remi Vignolo, the great french bassist. He was awarded the Hans Koller Prize for European Jazz in 2005. This prize recognizes the most outstanding european jazz artist. His 2006 album “Xenophonia”, won the “The victories in jazz 2007” prize for best album. His last album, “Tetraband”, was released by Universal Jazz France in October 2009. It featured Brooklyn-based trombonist Josh Roseman and drummer Seb Rochford London. Ruth Goller was the bassist. (“HUMUS”)