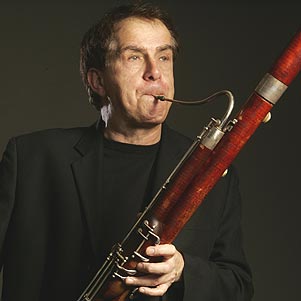 Daniel Smith, a critically-acclaimed soloist and recording artist, is the most well-recorded bassoon player in the world. His repertoire includes everything from jazz to classical to crossover music. His unique career has been featured in many publications. He is known as the ‘Gerry Mulligan’ of jazz and the Rampal of classical music’ for his ability to record and perform in both jazz and classical. The Music Industry Association awarded Daniel Smith’s 5 CD box set, which contains the complete 37 Vivaldi concertos for bassoon, the ‘Best Concerto Recording of the Year’. It was recorded with The Zagreb Soloists and the English Chamber Orchestra. His groundbreaking crossover albums, Bassoon Bon Bons’ and Bravo Bassoon’, demonstrate how flexible the bassoon is in adapting music from other genres to it. His jazz albums, “Bebop Bassoon” and “The Swingin’ Bassoon” (Zah Zah), were critically acclaimed and followed by “Blue Bassoon” and “Bassoon Goes Latin Jazz!” (Summit). You can also find other recordings by Daniel Smith on Vox and MHS, KemDisc and Spectrum. Notable performances include the premieres of Gunther Schiller’s “Concerto for Contrabassoon Orchestra”, Steve Gray’s “Jazz Suite for Bassoon u0026 Orchestra” and Robert Farnon’s jazz-oriented bassoon concerto called “Romancing the Phoenix”. Smith has given solo concerts at New York’s Lincoln Center as well as the Tivoli Concert hall in Copenhagen. Smith’s recordings can be heard worldwide on classical and jazz radio stations as well as National Public Radio in the USA. He is also featured on the Muzak network and book and record clubs. The annual Jazz Station Poll named Daniel Smith ‘Player Of the Year’. He was also voted ‘Rising Star” by Downbeat’s poll. Smith was also nominated twice for the Jazz Journalists Association’s ‘Player-of-the Year’ award. Smith was also designated as the British ‘Ambassador to the Bassoon’. He performed concertos, with piano recitals, and led a jazz concert with his band. His acclaimed jazz group, ‘Bassoon and Beyond, has performed in NYC at Puppets Jazz Club and Cafe Vivaldi. He also appeared at The Tea Lounge, The Kitano Jazz Club (5 occasions), The Brooklyn Conservatory Concert Hall and the Brooklyn VA Hospital. Other jazz performances include the Jefferson Medical College, Philadelphia, Twins Jazz Club, Washington D.C., The University of South Carolina and The University of South Carolina. from http://www.danielsmithbassoon.com