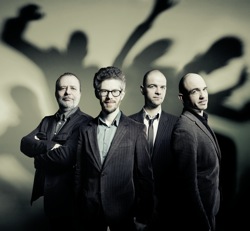 Zurich tenor saxophonist Michael Jaeger’s working band, which has become an established name in Switzerland and its neighbouring countries since 2006, is metonymic with markedly creative and progressive European jazz music, with „the sound of surprise“ (Die Weltwoche, Peter Rüedi). The KEROUAC band members are Vincent Membrez (p), Luca Sisera (b), Norbert Pfammatter (dr) and Michael Jaeger (ts, cl) – a spectacular cast of distinct and well-known exponents of the current Swiss jazz landscape. KEROUAC has been searching continuously for tonal and musical completion and invited a variety of well-known musicians to join the band. Thus, KEROUAC entered the stage of the Unerhoert! Festival in Zurich 2007 together with the great alto saxophonist Nat Su. It was in Bern in 2009 that KEROUAC met with the great Swiss improviser Urs Leimgruber (saxes) and Philipp Schaufelberger (g). The collaboration with Philipp Schaufelberger was continued and intensified in combination with New York saxophone star Greg Osby during a seven-day European tour in 2010. from http://www.michaeljaeger.ch