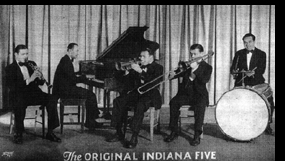 The Original Indiana Five weren’t from Indiana. The Original Indiana Five’s name is an apparent attempt to sound like other bands, such as the Original Memphis Five or the Original New Orleans Jazz Band. They were broadcast on radio and played mostly in New York City. They were active between the teens and early 1920s, and as far back as 1929. They recorded also under the name John Sylvester and his Orchestra. They played in New York until the 1950s and reunited in 1948. from http://www.redhotjazz.com