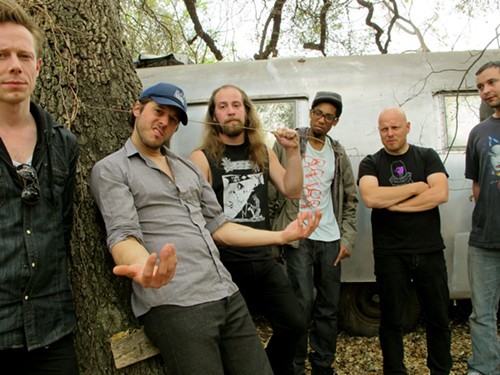 Ingebrigt Haker Flaten – ac. el. bass, compositions Jawwaad Taylor – trumpet/electronics/vocals Jason Jackson – alto, tenor and baritone saxophones Jonathan Horne – guitar/pedals Stefan Gonzalez – drums/vibraphone Frank Rosaly – drums/electronics If you’re going to live and work somewhere as a musician, you have to make that place your own. Ingebrigt Flaten, the man behind the bass could have stayed true to his roots in Chicago and Norway – where he is a key figure in the creative music scene. Flaten moved to Austin in 2009, despite the demands of frequent travel. He decided to form a Texas-centric band. As Bill Dixon, the trumpeter-composer, once said, “You start from wherever you are.” Flaten’s Texas trip began at The Young Mothers. Flaten selected Frank Rosaly, drummer in his Chicago Sextet (they also play together in the Scorch Trio or Dave Rempis Percussion Quintet). The rhythm section was completed by Stefan Gonzalez, a Dallas drummer and vibraphonist and son of Dennis Gonzalez (with bassist Aaron Gonzalez), Coming from the Houston scene and Nameless Sound are saxophonist Jason Jackson and trumpeter/MC/electronic artist Jawwaad Taylor (now NYC-based). Norway’s StianWesterhus was the original guitarist, but Jonathan Horne (Plutonium Farmers, Southwestern Free), has now taken over. The Young Mothers is a band that combines modern jazz, hip hop, and free improvisation. It’s reminiscent of Brotherhood of Breath. All of this is a risky endeavor, but Flaten’s keen ear and determination have produced a powerful and unique ensemble. The rhythm section is rich, deep and swinging. Jackson’s reed work, on the other hand, is both wild and soulful. Horne’s vast experience in punk and surf rock (as well a rugged free improvisation) ensures that The Young Mothers have someone on the front that is unpredictable and can draw from a variety of sources. This group is unrivalled when paired with Jawwaad, who combines Don Cherry-like flourishes and sputters with intelligent, off-kilter music. Flaten’s vision would have allowed for something like The Young Mothers to be formed. It might have, but it wouldn’t be The Young Mothers without Flaten’s vision. It is also inaccurate to call The Young Mothers a local band. Although they were founded in Austin, the world is still craving their joyful, diffuse vibe. From www.reverbnation.com