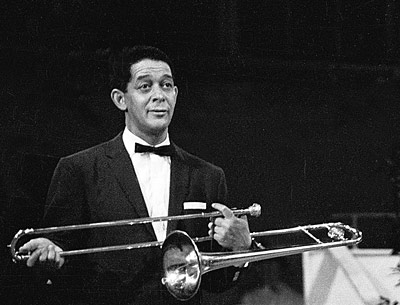 Trummy Young was a great trombonist during the swing era. He was also a very popular singer and pianist with Jimmy Lunceford’s Orchestra. Young was born in Washington and trained as a trumpeter. However, he switched to trombone when he made his debut in 1928. Young expanded the power and range of his instrument and was an asset to Earl Hines’ orchestra from 1933-1937. He also became a significant influence on jazz during his time with Lunceford (1937-1943). Young was a modern swing stylist who had an open mind and fit well with Charlie Parker, Dizzy Gillespie and Clyde Hart on a session in 1945. Also with Jazz at the Philharmonic. Young joined the Louis Armstrong All-Stars as a member in 1952. He stayed there for a dozen years. Armstrong was very fond of Trummy Young, who was an excellent foil (most notably on the 1954 recording of “St. Louis Blues”) but he simplified his style because he loved the trumpeter. Young left the road in 1964 to settle in Hawaii. He occasionally returned for special appearances and jazz parties. Allmusic