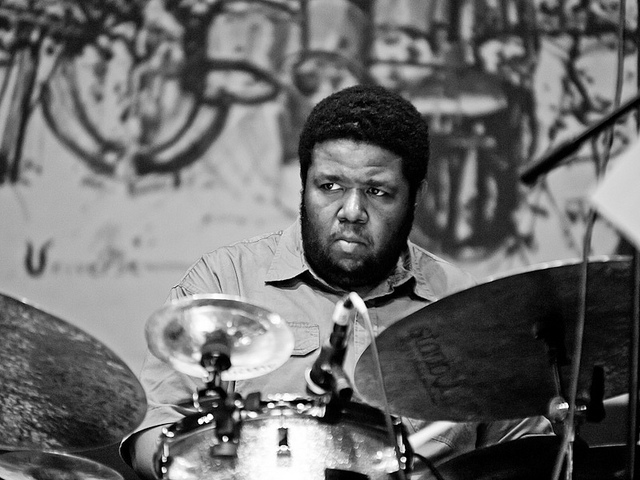 Tyshawn Sorey, a composer, performer and educator, is an active scholar, musician, and educator who has worked across a wide range of musical idioms. Tyshawn is a pianist, trombonist and percussionist. He has recorded and performed nationally and internationally with his own ensembles as well as with other artists like Steve Coleman, Butch Morris and Misha Mengelberg. Tyshawn’s work was well-reviewed in Traps and National Public Radio, JazzTimes. The Village Voice. The Wire. The Wall Street Journal. Tyshawn earned his B.M. as a scholar. Tyshawn received his B.M. in Jazz Studies and Production from William Paterson University in 2004. He studied composition with Anton Vishio, John Link and James Williams while also working under Peter Jarvis, the director of New Jersey Percussion Ensemble. Tyshawn began studying with composers Jay Hoggard and Tyshawn in 2009, culminating in his M.A. Wesleyan University. He is currently a faculty fellow in Columbia University’s Doctor of Musical Arts Program with a concentration on Composition. He studied primarily under George Lewis. Sorey has participated in and conducted lectures, panel discussions and master classes on composition, improvisation, and critical analysis at various venues, including the Chamber Music America conference, New York City, International Realtime Music Symposium, Hochschule fur Musik Koln and Musikhochschule Nurnberg. Tyshawn is a composer who has written over 160 pieces in all genres. He has received commissions from Roulette, Van Lier Fellowship and the International Contemporary Ensemble. The large-scale work will be premiered in its entirety in November 2012. Tyshawn is currently an instructor in composition andimprovisation at The New School for Jazz and Contemporary Music and School of Improvisational Music. from http://pirecordings.com