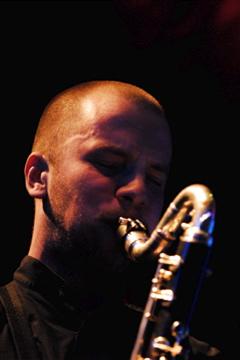 Clarinetist, composer who was born in Poznan on the 27th July 1983. Waclaw Zimpel is a prominent representative of the Polish jazz scene. As a co-founder and first member of Emergency jazz group, he sought his own unique expression that was rooted in jazz and classical music. He draws his inspiration from such artists as Ornette Coleman and John Coltrane, Jimmy Giuffre and Anton Webern, Igor Strawinski, Eric Dolphy, John Coltrane and Ornette Coleman. His musical explorations focus on modern musical material in improvisation and applying 20th-century compositional techniques to melody and harmony. His approach to music and his choice of instruments is what is distinctive about him. He graduated from the Ignacy Jan paderewski Academy for Music in Poznan (Poland) in Prof. Zdzislaw Noak’s class of classical clarinet. Zimpel also studied at Hochschule Fur Musik und Theater Hannover, where he was taught by Prof. Johannes Peitz. His musical ideas focus on classical and improvisational music. Classical music has had a significant impact on Waclaw Zimpel’s approach to the instrument, polyphony and phrasing as well as his articulation. He cites as examples Bach, Mozart and Chopin among the most important composers. Zimpel believes that improvisation is the best way to communicate. Zimpel has worked extensively with many contemporary improvisers, composers, such as Bobby Few, Joe McPhee and Steve Cohn. The Polish internet jazz magazine Diapazon announced Four Walls as the CD of 2008 for Tim Daisy and Zimpel. “Zimpel’s name goes straight into the list of European jazzmen that gave new life to clarinet and bass clarinet, continuing Dolphy’s example: Surman, Sclavis, Trovesi, and the like”, wrote Francesco Martinelli, (pointofdeparture.org, December 2010, USA). Waclaw Zimpel was the first Polish musician to win the All About Jazz honorable mention for Undivided Passion. This is the fourth album of the composer, and the first from his Undivided project. The clarinetist is joined by a rhythm section that includes Klaus Kugel, a prominent Ukrainian double bassist who recorded with Steve Swellem and Bobo Stenson. Bobby Few, a legend in world jazz and an heir to Bud Powell’s pianism, was invited by the Undivided trio to record this amazing music. In the 60s and 70s, American pianist Frank Wright recorded a memorable album with such luminaries as Archy Shepp, Steve Lacy, Archy Shepp, Frank Wright, and Albert Ayler. Zimpel, referring to his album Passion, stated that “the decision to record Passion was motivated by the desire to reflect through music on suffering, pain. This is the best way to talk about it. These texts can be a great source for inspiration. The essence of the Old Testament, New Testament and Zohar, Kabir’s poetry, great texts in Eastern mysticism, all of them say the same thing. This thing should be, I wish that it was, the essence and core of my music. Undivided released another album in 2011, this time with Perry Robinson, the jazz clarinet legend. Zimpel’s music is often called avant-garde, free jazz or avant-garde by music critics. But he prefers to use the term “music of the universe”. Zimpel recently discovered a lot of inspiration in folk music. He says that folk art is a shift to the spirit of creativity, which often escapes our modern world. Folk music’s importance lies in the sound meditation, immersion into sound and rhythm, and entering into a trance. Ken Vandermark, a Chicago jazz saxophonist and a guru among musicians who are involved in improvisation, has called Zimpel one of the most important musicians of his generation in Europe. Vandermark and Zimpel will perform a series in Poland in 2012, accompanied in part by the Resonance Ensemble as part of Vandermark’s experimental jazz project. Waclaw Zimpel leads: The Light Hera, Undivided and Four Walls. He is also a member Ircha group as well as Reed Trio and Resonance Kena Vandermarka. This year’s Chicago Umbrella Festival featured the best jazz musicians from all over the world. Zimpel introduced to Chicago audiences his new band, which was made up of American musicians: guitarist Matt Schneider and drummer Tim Daisy. He also featured bassist Devin Hoff. He performed with the following groups: Mikolaj Trzaska Quartet; Trzaska/Zimpel/Dys; Zimpel/Kusiolek; Clarinet Summit Z Theo Jorgensmannem. Author: Ewa Paderewska, February 2011. Source: popupmusic.pl, Waclawzimpel.pl