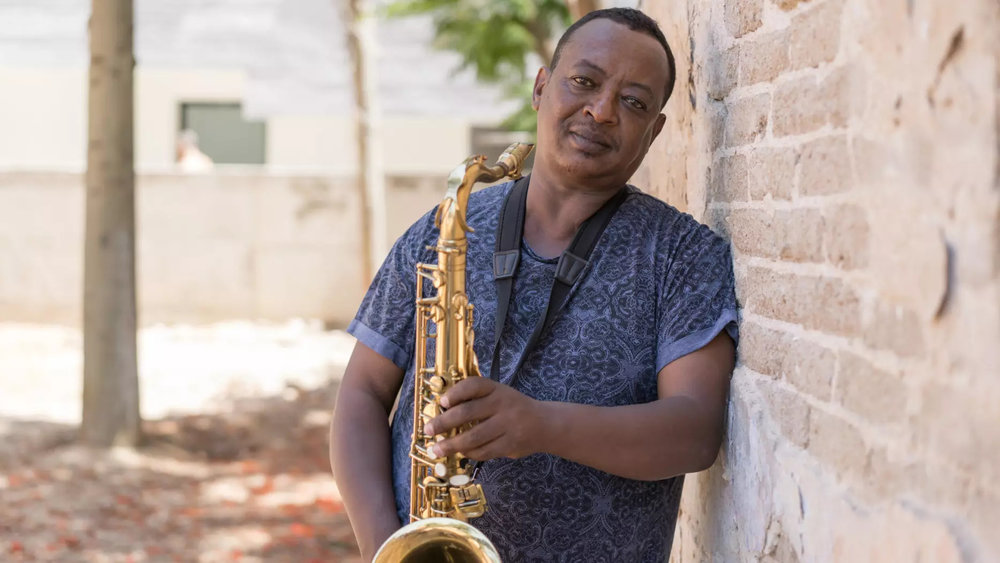 Abate Berihun, an Ethiopian-Israeli jazz composer, saxophonist and vocalist, is also a singer and composer. He is a prolific musician and one of Israel’s most well-known Ethiopian musicians. Berihun, originally from Addis Ababa in Ethiopia, was able to get a saxophone early on and enrolled at the Addis Ababa University music school. He was exposed to Western jazz and John Coltrane’s albums, which were two of his greatest musical influences. Berihun was 16 years old when he joined the Ethiopian Military Band. Six years later, Berihun’s life was abruptly halted when EPRDF troops attacked the band bus. They were rebelling against Mengistu’s Marxist dictatorship. The attack resulted in most of the band members being killed, while Berihun was shot twice. Berihun played in the Ethiopian National Theater, and toured internationally along with Mahmoud Ahmad and Mulatu Astatke. He started his own jazz band at 21 and toured Europe three times per year. He returned to Israel three weeks after his last European tour. Berihun moved to Israel with his family in 1999. Due to the challenges and pressures of acculturation, Berihun has had to face some financial and cultural adversity in pursuing his music career in Israel. It has been difficult for him to achieve his dream of becoming a musician in Israel. Berihun struggled with language barriers and was also obligated to pay alimony. He worked night security and dishwasher at a restaurant during the day. Dishwashing detergents caused burns on his fingers, which made it difficult for him to play his saxophones. Berihun’s professional life began to change after he was discovered by Moshe BarYuda, then head of the TOMER Non-Governmental Organization. Bar-Yuda brought Berihun and Shlomo Israel together, who were deeply moved by Berihun’s playing. Israeli then paired Berihun and jazz pianist Yitzhak Yadid in a musical partnership that led to the Ras Deshen Ensemble. The Ras Deshen Ensemble is named after the Ras Dashen mountain in Ethiopia. It combines free jazz with the musical styles of the Ethiopian highlands. Berihun founded the Kuluma Band in 2003 with Alon Yoffe (drums, vocals, and itamar borochov (trumpet), Uri Naveh, (West African drums), Sangit Dotan Segal (Afro-Cuban vocals and percussion), Orr Bareket, (bass guitar), and David Adda. Their debut album Mother Tongue was released in December 2005. The album and the concerts, which mixed Ethiopian music with Cuban influences gained them critical acclaim. He then started another project, SHABATE. This ensemble fuses traditional Jewish soul with Ethiopian jazz grooves. SHABATE released an album and toured the country. Berihun also led two other successful ensembles, Tezeta (“nostalgia”) in Amharic. This was created with the goal of promoting the revival of Israeli-Ethiopian music culture. Tezeta’s ensemble features unique and ancient Ethiopian instruments like the krar and single-string masenko, as well as the kebero percussion instrument. Tesfa Band (“hope”) in Amharic, is the second group. It features young Israeli musicians. Berihun is also well-known for his collaborations and performances with artists like Ariel Zilber (Ehud Banai), Yossi Fine. Kutiman, Anat Fort, Omri Mo, Shay Zelman, Shay Zelman, Shay Zelman, Shay Zelman, Shay Zelman, Shay Zelmann, Yossi fine, Kutiman, Anat Fort, Omri Mort, Shay Zelman, Shay Zelman, Shay Zelman, Ehui) Berihun’s newest project is ADDIS KEN, which means “New Day” in Amharic. The quartet, co-led and led by Roy Mor, presents original compositions as well as Ethiopian-Jewish-Jewish-soul music and songs inspired from Jewish prayers. It is an exciting encounter between ancient Ethiopian traditions, modern jazz ensembles and the spirit of a modern Jazz Ensemble, using musical adventurousness and rich harmonies. from https://en.fbmc.co.il