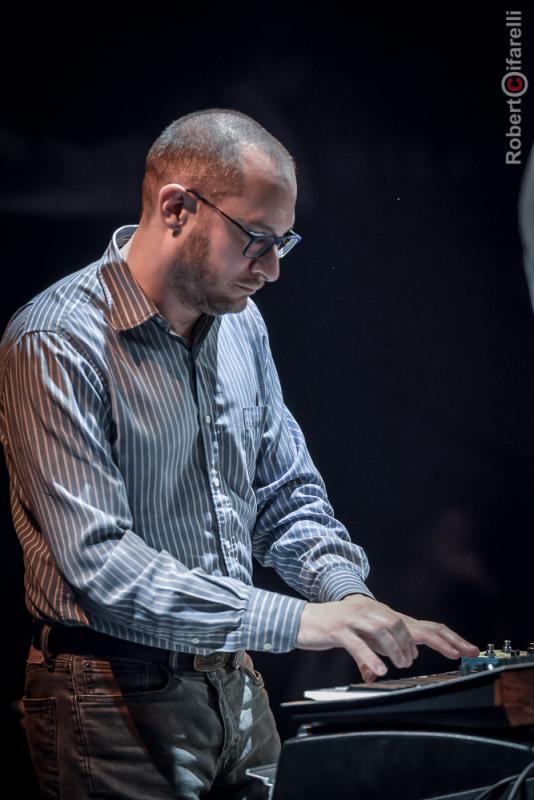 Adam Benjamin, a Grammy-nominated, critically acclaimed keyboardist, pianist, composer, and writer, is based in Los Angeles. He has been recognized as a Rising Star of Jazz in Downbeat magazine’s critic’s and readers polls for the past two years. His unmistakable sound transcends stylistic boundaries and challenges conventional notions of jazz. However, he retains a humble and humorous approach which connects him to his fans around the world. He is the founder of Kneebody, an iconic electric quintet that is widely regarded as one of jazz’s most distinctive ensembles. Their Grammy-nominated 2009 release, “You Can Have Your Moment”, is a radical reinvention and collaboration of Charles Ives’ songs with Theo Bleckmann (Winter u0026 Winter, 2009). You Can Have Your Moment is their fourth full-length album (Winter u0026 Winter, 2010). It’s the fourth full length album by the “spontaneous” and “freakishly gifted” (All About Jazz) quintet. Alphabets and Consequences, his latest solo piano album (f.Boo Music), 2010, is a series of unique improvised miniatures that transform folk and jazz melodies into quirky impressionist tunes, bursting with humor and gravity. This album follows Long Gone’s 2008 self-release, Kind of Blue, and his 2007 self-release, It’s a Standard, Standard, Standard, Standard, Standard World, in which he captured 37 jazz standards using Garageband 1.0 technology. Dave Douglas praised this hilarious, yet oddly expressive album as a “major tour de force”. Dave Douglas’ electric band Keystone has taken him on numerous tours and recorded many songs, including Spark of Being, which was a collaboration with Bill Morrison. Adam’s contributions are central to the Keystone albums Live in Sweden (2006) and Moonshine (2008). Adam has performed with, collaborated, and toured alongside artists such as Jimmy Chamberlin Complex and So Percussion. He has also contributed to scores to numerous films, including the score to John Krasinski’s 2009 adaptation of David Foster Wallace’s Brief Interviews with Hideous Men. He has performed at the Hollywood Bowl, Carnegie Hall, North Sea Jazz Festival and CalArts. From www.fboo.com