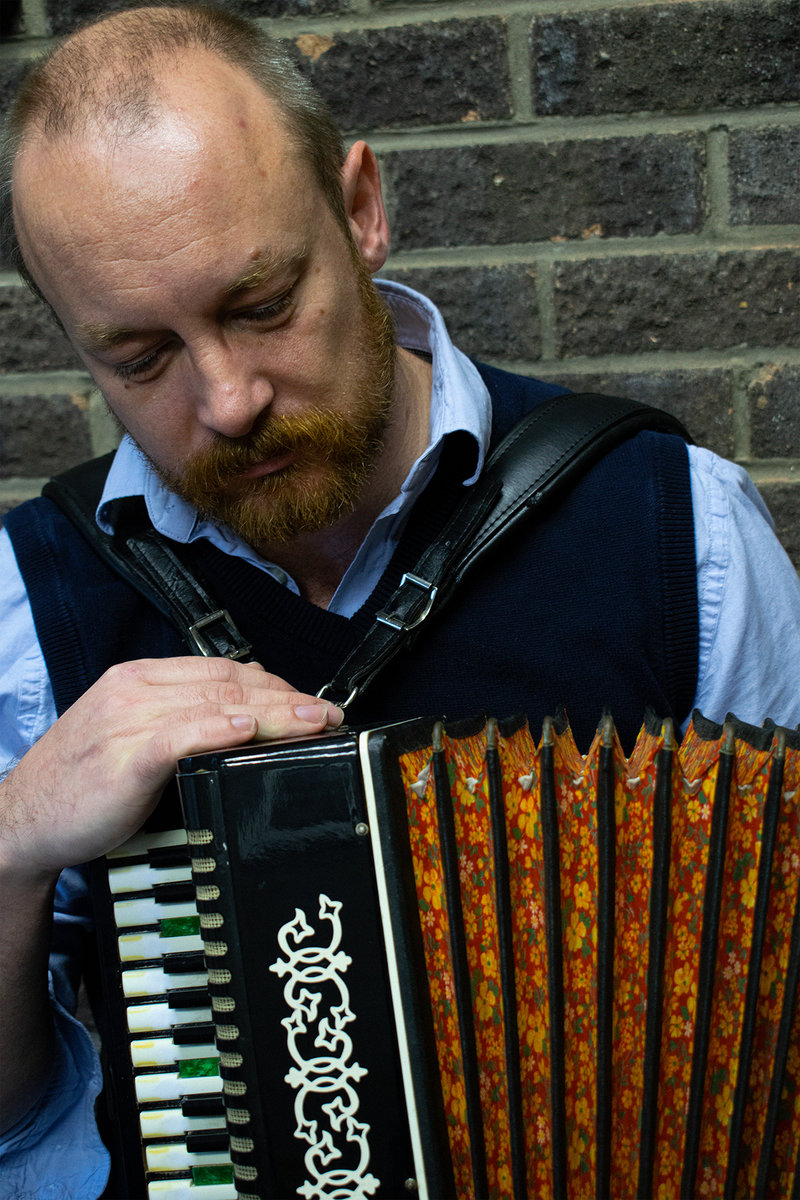 Adam Fairhall is a jazz pianist and improviser with exceptional versatility who has earned an international reputation over the past decade. He is based in Manchester, England, and is active on the city’s growing creative music scene. His most notable achievements include his role as the pianist for Nat Birchall’s Coltrane-inspired group, as well as free improvisation with acclaimed bands like The Spirit Farm. His first album under his own name, The Imagary Delta (SLAM2012), was awarded Album of The Year by Bird Is The Worm. It revealed a deep knowledge of early jazz and how it can be connected to contemporary idioms and free jazz. This synthesis has been continued in his solo piano album, Friendly Ghosts, (Efpi 2017, 2017). Adam’s playing allows for idioms from any period to be mixed, subverted, hinted, or played completely straight. His goal is to use his vast knowledge of jazz piano techniques from ragtime and free jazz to create a playful, spontaneous, and often unpredictable improvisational style that generates its own energy and momentum. Friendly Ghosts was released on BBC Radio 3 and Jazz FM last month. It has received 4-star reviews and airplay. Adam started playing boogie and blues at school lunchtimes with his friends. In his teens, he took piano lessons that covered jazz harmony and repertoire. He then moved north to study Contemporary Arts at MMU Cheshire where he earned a first-class honours degree as well as an MA with distinction. Adam decided to dedicate his undergraduate studies to jazz studies. He completed his MMU studies with a Master’s degree at Leeds College of Music in 2005. He also studied with Mark Donlon, a pianist, and Matthew Bourne, a pianist. He was awarded the Sam Hood Rosebowl by the college for outstanding jazz performance in 2005. Adam returned to MMU in 2008 to continue his research and practice. He received a PhD in 2008. Adam also continues to hold a part time position as Senior Lecturer for Popular Music in Cheshire’s Department of Contemporary Arts. Adam’s most ambitious ensemble project, with a seven-piece orchestra, is The Imaginary delta. Manchester Jazz Festival commissioned The Imaginary Delta. It premiered at Band on the Wall in Manchester in July 2011. To great acclaim, the premiere was voted the No. Chris Ackerley, a journalist, ranked the gig as the No. 1 in 2011. The project features a 3-horn frontline and Paul J Rogers on laptop and turntable. The music is a reinterpretation of early jazz forms in an unexpected, passionate, and sometimes highly deconstructive manner. A live recording of the band was released by SLAM in spring 2012. It received consistently high ratings in newspapers, magazines and blogs. The band also appeared on the Vortex’s programme at the London Jazz Festival 2012 and at the Forge in Camden in February 2013. The album was named Album of the year by Bird is the Worm and received an Honorable Mention from Ted Gioia, an American critic. Manchester Jazz Festival and Manchester Literature Festival commissioned Adam to rework The Imaginary Delta with Jackie Kay. They used Jackie Kay’s poems about Bessie Smith as well as new poetry. The work was performed at Manchester Literature Festival 2014 and the Royal Northern College of Music. Jackie and Adam performed new material from their collaboration on Radio 3’s Women’s Hour, July 2014. Adam is the leader of The Imaginary Delta, his solo playing, and The Spirit Farm, a six-piece improvising group that has been fast becoming a well-known and innovative group of improvisers. Jazzwise praised the band as an “improv supergroup” and “devastatingly inventive”, and gave it a 4-star rating in their review of its 2015 debut album. All members of the band are located north of London. The Wire and Jazz Journal have praised the group, while The New York City Jazz Record gave it a long, highly positive review. Recently, the band played to packed houses in an Arts Council-funded English venue tour. Adam is also involved in or co-leads projects that include an organ trio (The Revival Room), which will support Uri Caine at The Howard Assembly Rooms, November 2017, to piano trios (Fragments Trooper and The Markov Chain). He is increasingly involved in accordionist work, as he plays various keyboard instruments, such as the Indian harmonium, drawbar organ and prepared electric piano. Adam is a skilled musician who enjoys subverting conventions and exploring the unique, individual characteristics of each instrument as well as its potential for free play. Adam is becoming more sought-after as a free player in both the London and northern scenes. He has developed a vocabulary that allows him to play instruments that are very rare in this field. He took his toy piano collection to New York in 2015 for a solo set at ABC No-Rio Lower East Side. There he played after Daniel Carter, a renowned saxophone player. Adam has recorded five albums as either a leader or co-leader and ten albums, as well as numerous BBC sessions as an accompanying musician, including a session with Nat Birchall, a renowned saxophonist. Adam was interviewed by Jazzwise (August 2012), and Wire (May 2016, respectively) and was chosen for the Northern Line scheme in 2014 as a solo artist. Concertzender, a Dutch public radio station, dedicated an episode of its programme “Art of the Improvisers” to Adam’s work in November 2014. Adam was chosen for Take Five Five Edition VI in 2009, a prestigious professional program that gives “some of the UK’s most skilled young jazz musicians the unique chance to take some time out to develop and grow their craft.” Take Five is a Jerwood charitable Foundation/PRS Foundation initiative, with additional support from Arts Council England (Musicians Benevol Fund) and Arts Council England. from www.adamfairhall.co.uk