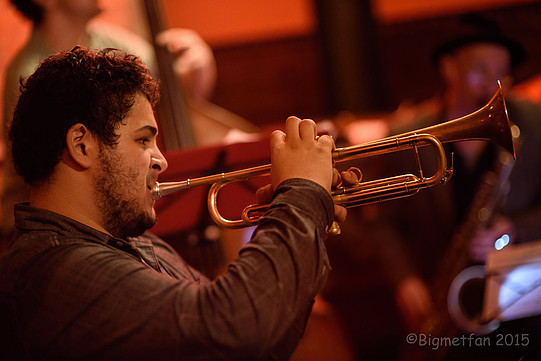 Adam O’Farrill was a Brooklyn, NY native, born September 8, 1994. His musical heritage was a strong influence on his childhood. Chico O’Farrill was his grandfather, a legendary Afro-Cuban composer/arranger (worked alongside Benny Goodman and Count Basie), Stan Kenton, among others. Arturo O’Farrill is his father, a jazz pianist and bandleader who also founded Afro Latin Jazz Alliance. Alison Deane is his mother and a professor at CUNY City College. Zack O’Farrill is his brother and a composer. Adam started studying piano when he was 6 years old, and trumpet when he was 8. O’Farrill was a student at the Fiorello H. LaGuardia High School for Music, Art and Performing Arts, and met Robert Apostle, one of his most influential teachers. O’Farrill is now finishing his undergraduate studies at Manhattan School of Music. He has studied trumpet with Laurie Frink and Thomas Smith, Tony Kadleck and Greg Gisbert. Reiko Fueting is currently studying composition. Vijay Iyer directed the Jazz and Creative Music Workshop at the Banff Centre. Adam and his brother released two albums under the O’Farrill Brothers Band on ZOHO Music. They are 2011’s Giant Peach and 2013’s Sending Flight. Both were critically acclaimed, particularly the latter. Sensing Flight was named one of Jazztimes’ top 50 albums of 2013. It also received a 4-star review by Downbeat Magazine. All About Jazz’s Dan Bilawsky said about the album: “…drummer Zachary O’Farrill, still-in-his teens trumpeter Adam O’Farrill, have gone a step further, reaching an artistic confidence that eludes most players of any age.” O’Farrill participated in the 2014 Thelonious Monk International Jazz Trumpet Competition. He performed before a panel that included Quincy Jones and Roy Hargrove. Arturo Sandaval was also O’Farrill was among the top three finalists out of 13 semifinalists and hundreds of applicants, and was awarded 3rd place. Adam was a member MSM Jazz Arts Quintet in March 2014. They competed in the Keep an Eye Competition, Amsterdam, NL. O’Farrill was awarded the Best Soloist prize and the group won the 1st place prize. O’Farrill is also a recipient the ASCAP Gerswhin Award, and the ASCAP Student Jazz Composer Award. Adam formed Stranger Days, his first band as a leader in 2014. It features Chad Lefkowitz Brown on tenor and Walter Stinson (bass) and Zack O’Farrill (drums). The band is heavily influenced by theater and film. They take ideas from human nature and conversation and find new musical and instrumental uses of them within the context of the band and the compositions which are largely Adam’s. Each piece should feel like a scene. The focus is on the characters’ actions in both dialogic and coloristic ways and how they affect the piece’s landscape. The musicians are the protagonists in this instance. Rudresh Mahanthappa recently released Bird Calls, a 2015 album featuring Adam. This project is inspired by Charlie Parker and O’Farrill features alongside Mahanthappa and pianist Matt Mitchell, bassist Francois Motin, drummer Rudy Royston, and bassist Francois Moutin. The album was released by ACT Label in February and received wide critical acclaim. O’Farrill’s performance was described by Ben Ratliff, NY Times, as “a poised, battling jazz musician, running variations upon the unusual melodic material, attacking it with complete presence in his own voice, and giving it all his full attention.” O’Farrill has been a part of many bands, including the Afro-Latin Jazz Orchestra and Stephan Crump’s Rhombal, Ben Vangelder Sextet and Travis Reuter Band. Samora Pinderhughes’ Transformations Suite, Gabriel Zucker, The Delegation and The Eco-Music Big Band. The Gregorio Uribe Big Band. The Livio Almeida Brazilian Dectet. Paul Bloom’s Aeneid Project. O’Farrill has also played with many young, rising NY rock bands and electronic musicians, including Sister Helen, Caverns, The Jacobins, MAXO, and Sleator/Westmoreland/Soto. Adam has performed at prestigious venues around the globe, including at the Newport Jazz Festival in Newport, RI, Teatro Mella in Havana, CU, Mount Fuji Jazz Festival in Japan, Bimhuis in Amsterdam, NL, the White House (Washington DC), Birdland, Montclair State University, Montclair, NJ, Marian’s Jazz Room, Bern, CH, and many others. Adam O’Farrill’s Stranger Days performed at numerous venues including The Jazz Gallery, Yale University and the BMCC Tribeca Performing Arts Center. Arturo O’Farrill co-produced the album. Although the album has no title or release date at this time, it is expected to be released in the Fall 2015. As part of the Frida Kahlo Art-Garden Life exhibition, Stranger Days will hold a mini-residency in New York Botanical Garden. They will be performing original and existing music that is inspired by both traditional Mexican music and Frida Kahlo’s life and art. For upcoming dates, please visit the SHOWS page. Adam O’Farril exclusively plays Josh Landress Brass from www.adam-ofarrill.com