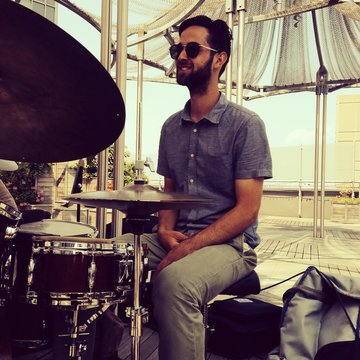 Adam was born in Toronto and began his musical journey at an early age. Adam began his musical journey with the drum set and other hand percussions. He also played in numerous school bands and ensembles. His passion for performing and the experience of rehearsals fueled his love for the art and influenced his musical development. Adam received a degree in Jazz Performance from Humber College in 2007. He began performing regularly in Toronto’s music scene as well as abroad. Participating in the International Jazz Workshop held at The Banff Centre for the Arts, where he performed and studied with world-renowned musicians. He also completed a self-directed residency that focused on developing his artistic ideas and creating original music. Adam was awarded several Professional Development Grants by the Ontario Arts Council as well Canada Council for the Arts in order to study world rhythms in Paris, France with Brice Wassy and Sonny Troupe. These experiences have enriched Adam’s voice as a musician, and played a major role in his professional career. Adam has been a performer with many artists, including Tony Malaby and Rudresh Mahanthappa. Adam is currently based in London, UK and performs regularly on the international music scene. From www.adamteixeira.com