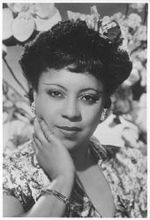 Adelaide Hall is one those overlooked singers. She was a prominent performer between World Wars, but she was forgotten in the years after. It’s frustrating that she is not being recognized or represented in the record catalogue because she was one the most popular black singers of her time. Adelaide Hall, the younger of the two daughters of William Hall, and Elizabeth Gerard, was born in Brooklyn, NY between 1895-1909. Many biographers believe that 1909 is the correct year. William Hall was a piano teacher at the Pratt Institute and began both his daughters in music early. Adelaide preferred singing to the piano. She formed a piano-vocal duo with Evelyn, which performed at school and church events. Evelyn’s death in 1918’s influenza epidemic caused family members to be devastated. Hall then turned her attention towards supporting her mother and herself. In 1921, she was chosen for the Shuffle Along chorus and her first Broadway break was in Broadway. She was cast in Runnin’ Wild in 1923. The following year, she married Bert Hicks, a Trinidadian merchant seaman. Hall was booked by the RKO-Keith to perform a series on the same bill as Duke Ellington in late 1927. Hall discovered “Creole Love Call”, a new Ellington tune, during this engagement. They recorded it together in October 1927 for Victor Record Company. “Creole Love Call”, which was Hall’s first major hit, became Hall’s signature song for many decades. Hall took over the role of Florence Mills’ leading lady, and introduced “I Can’t Give You Anything But Loving” a year later. As the songs and hits continued to come her way, she seemed unstoppable. In 1931, she was given a two-week engagement at London Palladium. This led to the establishment of a contractual relationship. Eight new songs were recorded at that time and many more records over the next dozen years. Hall was back in the U.S. when she met Art Tatum, a young pianist. Joe Turner recommended Tatum as a replacement when Hall decided to leave. They performed for a brief time together and recorded as well. Hall’s career could have continued in the United States but for a series harrowing events that followed when her mother, husband and daughter moved into a house she had purchased in Larchmont. The wealthy white community was not prepared to accept a black family and tried to make them leave legally. However, that failed and the house was set on fire. Hall refused to risk her mother’s safety. Hall brought her back to New York City. But, things were never the same for her or her husband. They moved to Paris in the middle of the 1930s where she was a star singer. Hall was a star in the City of Lights during the last postwar boom. This was when Stephane Grappelli and Django Reinhardt were just beginning to build their respective legendary careers. Josephine Baker was also the talk of the town. Hall and her husband opened their own club which was a huge success. Hall was confronted by a young man who claimed to be a member of European nobility in 1938. He threatened to kill Hall and his family if she refused to accept a romantic assignment. Instead of staying around to verify whether any of his claims — including the royal title — were true, Hall and her husband fled for London. They took advantage of an offer from Charles B. Cochran, an English theatre producer. Today, Rodgers is the most famous example of Cochran.