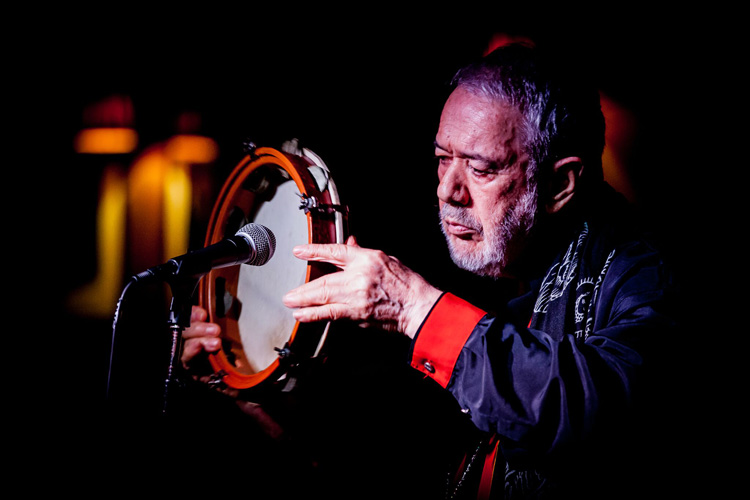 Airto Moreira was a child of the Itaiopolis village in south Brasil. He was raised in Curitiba. Before he was able to walk, he began shaking and banging his feet every time a new song was played on the radio. His mother was worried, but his grandmother saw his potential and encouraged him. He was six years old when he won numerous music contests, playing percussion and singing. He was given his own radio station every Saturday afternoon by the city. He became a professional musician at the age of thirteen, playing drums and percussion. At sixteen, he moved to Sao Paulo and began performing in nightclubs and television as both a drummer, percussionist and singer. He met Flora Purim, a singer from Rio de Janeiro in 1965. Airto was soon after Flora, who moved to the USA in 1967. Airto started playing in New York with JJ Johnson, Reggie Workman and Cedar Walton. Airto first began playing with greats like Lee Morgan, Cannonball Adderley and Joe Zawinul through Booker. Miles Davis recommended Airto to Zawignul in 1970, for a session for “Bitches Brew”. Davis invited Airto to join the group that included jazz legends such as Wayne Shorter and Dave Holland, Jack DeJohnette and Chick Corea, and later John McLaughlin, and Keith Jarrett. Airto stayed with Miles Davis for two years and appeared on many Miles recordings, including “Live/Evil”, “Live at the Fillmore”, “On the Corner”, “The Isle of Wight”, “Bitches Brew”, and later “Fillmore Sessions” releases. Airto joined Miles Davis’ Weather Report, along with Joe Zawinul and Miroslav Vitous, where he recorded “The Weather Report”. He joined Chick Corea’s original Return to Forever band with Flora Purim and Joe Farrell shortly thereafter. They recorded the albums “Return to Forever”, and “Light as a Feather”. Airto, Flora Purim and Joe Farrell formed “Fingers”, his first U.S. band in 1974. They have been performing all over the globe ever since and have recorded their own album for major American and European record labels. Airto is still a highly sought-after percussionist in popular music. Airto’s extensive collection of instruments and his ability to play the right sound at just the right time have made him a top choice for many producers and bandleaders. Airto’s work with Quincy Jones and Herbie Hancock as well as Gil Evans, Gil Evans and Carlos Santana are just a few of the many musical contributions he has made over the past three decades. Airto’s impact was so great that Downbeat magazine included percussion in its reader and critic polls. He has won more than twenty times since 1973. He was voted the number one percussionist in Jazz Times, Modern Drummer Magazine, Drum Magazine and Jazzizz Magazine. As a member the “Planet Drum” drum ensemble, he has been instrumental in advancing world and percussion music, as well as master conga player Giovanni Hidalgo, Sikiru Adepoju, and Tabla virtuoso Zakir Hussain. Planet Drum was awarded a Grammy Award for World Music in 1991. Airto was also a part of “Dizzy’s United Nations Orchestra”, a Grammy Award-winning ensemble that won the award for Best Live Jazz Album. Airto is passionate about Brazil’s music and people and he returns every year to see old friends and family, as well as pay respects and honors to his spiritual guides. Airto was involved in “Spiritism”, from an early age. He used to attend the “sessions” along with Jose Rosa Moreira, his father who was a spiritual healer throughout his entire life. Airto’s lifelong interest in spirituality led to him recording The Other Side of This. This is an exploration into healing and spirituality. Airto also composed and performed the Brazilian Spiritual Mass for a special two-hour broadcast on German television. This was with the WDR Philharmonic Orchestra, Cologne, Germany. This rare performance was recorded on Vinyl by the classical record label “Harmonia Mundi”, and licensed as WDR video, which was broadcast all over the globe. Airto was a guest star on the Boston Pops Philharmonic Orchestra’s special for PBS TV. He also performed with the Smashing Pumpkins Unplugged for MTV. Depeche Mode’s newest CD, “Exciter”, and the Japan-based percussion group Kodo. Airto contributed two of his compositions to the 2001 Kodo recording: “Maracatu”, and “Berimbau jam”. To open the ceremony in Japan, the official song for 2002 World Cup in Asia was “Maracatu”. Text contributed by users is available under Creative Commons By–SA License. It may also be available under GNU FDL.