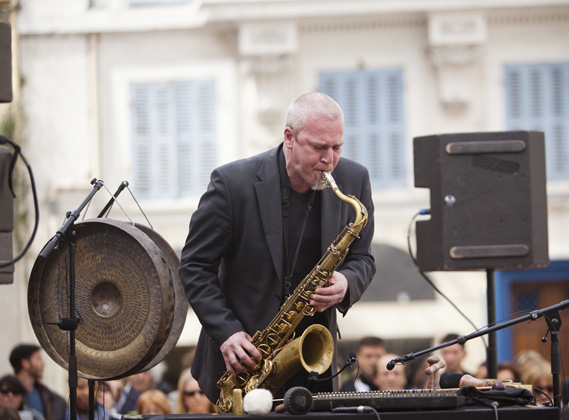 Since fifteen years, the Parisian scene has been engulfed by the torrential sound and branding-iron heat of Akosh Szelevenyi. Ever since he arrived in the French capital, the young Hungarian, a saxophonist, clarinetist, multi-instrumentalist and composer, has been associated with the genuine (and jubilant) rebirth of the avant-garde – after the lengthy hegemony shared by fusion and neo-bop – as well as many other alternative movements; and in 1991 he formed his own little variable-geometry band (from four to nine musicians) and began making his own records. The group, Akosh S. U, opened for Noir Desir in the mid-Nineties. In 1997, the man affectionately called “free jazzman” signed with Barclay Records (then PolyGram, now Universal). The next three albums (“Vetek”, Kebelen, and Lenne”) were equally passionate, stirring, and thrilling. They formed a triptych which established an inventory of the first “Unit”. Akosh discovered a new group, which now includes Quentin Rollet, Marseilles bassist Christian Brazier and drummer Gildas Etevenard. Andras Wigh is a vocalist and specialist on all things relating to the hurdygurdy, an instrument that has almost-orchestral functions and belongs to the string-family. However, it has a wind-up keyboard and handle. The sound reminds one of the sheets of sound you might hear from a synthesizer with a swarm humming bees or a violin with distant Orient scents… “Nap Mint Nap”, the 2003 album by Akosh, marked a pivotal moment in his career. Akosh’s most memorable album, AKI, was recorded in a small church in Hungary at Vamosszabadi. The idea of recording a solo album was something that Akosh had been working on for some time. The guiding line that would give form to the project was all that was missing. Akosh finally chose to live a more ascetic lifestyle and has now released this album. It is pure, 50-minute improvisation that is an absolute raw diamond. From www.jmp.fr