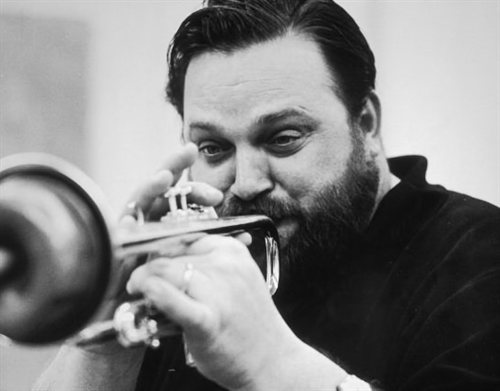 Other Nicknames include “Al (He’s the King!) Hirt” and “The Round Mound of Sound.” Date of Birth: 7 November 1922, New Orleans, Louisiana, USA Date of Death: 27 April 1999, New Orleans, Louisiana, USA (liver cancer) Height: 6′ 2″ (1.88 m) Alois Maxwell Hirt, known as “Al” or “Jumbo”, was born in New Orleans, Louisiana, the son of a police officer. At the age of six, he was given his first trumpet, which had been purchased at a local pawnshop. He would play in the Junior Police Band with the children of Alcide Nunez, and by the age of 16, Hirt was playing professionally, often with his friend Pete Fountain. During this time, he was hired to play at the local horse racing track, beginning a six-decade connection to the sport. In 1940 Hirt went to Cincinnati, Ohio to study at the Cincinnati Conservatory of Music with Dr. Frank Simon (a former soloist with the John Philip Sousa Orchestra). After a stint as a bugler in the United States Army during World War II, Hirt performed with various Swing big bands, including those of Tommy Dorsey, Jimmy Dorsey, Benny Goodman, and Ina Rae Hutton. In 1950 he became first trumpet and soloist with Horace Heidt’s Orchestra. Hirt then returned to New Orleans, working with various Dixieland groups and leading his own bands. Despite Hirt’s statement years later “I’m not a jazz trumpet and never was a jazz trumpet” he made a few recordings where he demonstrated ability to play in that style during the 1950s, notably with bandleader Monk Hazel and a few other recordings on the local Southland Records label. Hirt’s virtuoso dexterity and fine tone on his instrument soon attracted the attention of national labels. Hirt had 22 different record albums on the Billboard Pop charts in the 1950s and 1960s. The albums Honey In The Horn and Cotton Candy were both in the top 10 best sellers for 1964, the same year Hirt scored a top hit single with his cover of Allen Toussaint’s tune Java. Hirt’s recording of Nikolai Rimsky-Korsakov’s Flight of the Bumblebee was used as the theme song for the 1960s television series The Green Hornet, and again gained public attention in 2003 when it was used in the film Kill Bill. Planting deep roots in his community, Hirt opened up a club on Bourbon Street in the French Quarter in 1962, which he ran until 1983. He also become a minority owner in the NFL expansion New Orleans Saints in 1967. On February 8, 1970, while performing in a Mardi Gras parade in New Orleans, Hirt was injured after he was struck in the mouth by a piece of concrete. The throw from the raucous crowd severed the muscle developed in trumpet playing and required 16 stitches to close, but he quickly recovered. In 1987 Hirt played a solo rendition of Ave Maria for Pope John Paul II’s visit to New Orleans, a performance Hirt considered one of his most important. Hirt died in New Orleans of liver failure after spending the previous year in a wheelchair due to edema in his leg. Despite this handicap, Hirt continued to play in local clubs, often being wheeled to the stage. His remains were buried in Metairie Cemetery. User-contributed text is available under the Creative Commons By-SA License and may also be available under the GNU FDL.