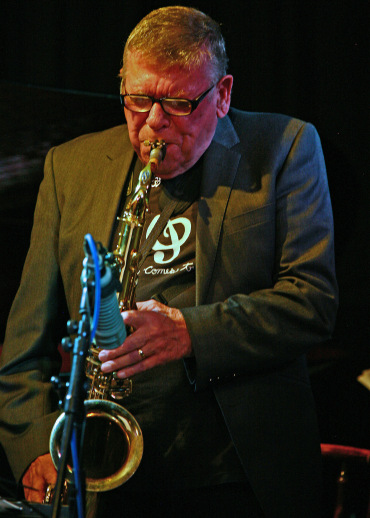 Alan Skidmore was born on May 2, 1942 in London. His musical education was received at the London Conservatory. As a young man, he played with Alexis Korner and John Mayall. He also performed with the Johnny Dankworth Orchestra, Stan Tracy Band, Ronnie Scott, and Georgie Fame. Later, he played with Tubby Hayes and John Surman’s “Brotherhood of Breath”, Chris MacGregor, the George Grunz” “Concert Band”, EberhardWeber, Niels Hing Orsted Pedersen Weather Report, Dave Holland, and the BBC Big Band in London. He recorded with Mike Gibbs, Mike Westbrook, and Herbie Hancock. He also founded SOS with John Surman. He was a guest soloist with the NDR Big Band in Hamburg and the WDR Big Band from 1981 to 1984. Charlie Watts toured the US and Europe with him. He performed at the Queen Elizabeth Hall with Colin Towns Mask Orchestra. He represented England at the International Jazz Festival in Montreux in 1969. His quintet won the first prize in the media and Alan was rated the best soloist. He has been the recipient of the English Jazz Polls’ “Melody Maker”, tenor saxophone award for many years. He has made vinyl and CD recordings with Chick Corea, George Grunz, SOH, the European Jazz Quintet, Third Eye, Georgie Fame, the EUROPEAN JAZZ ENSEMBLE, as well as with his own quartet from http://www.jazzbox.com