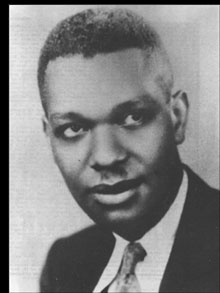 Born in Little Rock, Arkansas in April 1906, Alex Hill, the eldest son of an African Episcopalian minister and a pianist/music teacher, defied his parents’ wishes by devoting most of his life to secular music. An experienced pianist before he turned professional at the age of 16, Hill then served his apprenticeship with several territory bands, including those of alto saxophonist Alvin “Fats” Waller (nominally an uncanny harbinger of his association with Fats Waller) and Terrence Holder. Having formed his own band in 1924, by 1926, as musical director of a touring revue, Alex Hill became stranded on the West Coast, where he joined the trumpeter Mutt Carey’s Jeffersonians, in addition to writing for other bands, such as Paul Howard’s Quality Serenaders. By the late 1920s, Alex Hill had settled in Chicago, then the Mecca of jazz. Appointed staff arranger for the Melrose Brothers’ publishing company, Hill followed in the distinguished footsteps of Jelly Roll Morton. Both inside and outside the recording studio, Alex Hill worked with the trumpeter Jimmy Wade’s Dixielanders and clarinetist Jimmie Noone’s Apex Club Orchestra. The pianist also was the nominal leader on some small group recordings made between 1929 and 1930, with personnel recruited from such prominent Chicago based outfits as those led by pianist Earl Hines and Sammy Stewart. It was in his capacity as the pianist/musical director of the latter that Alex Hill arrived in New York in the spring of 1930, for an engagement at the prestigious Savoy Ballroom. When, at the end of their sojourn, his colleagues returned to the Windy City, Hill, along with the tenor saxophonist Chu Berry and the drummer, Big Sid Catlett opted to stay. In December of that same year, Alex Hill teamed up with his fellow pianist/composer Fats Waller, as part of a seasonal revue, “Hello 1931”, at New York’s Alhambra Theatre (7th Ave. and 126th St.). There were to be just a handful of engagements and recordings in the remaining six years of Hill’s life. His most widely known recording date must have been the October 1933 one, under guitarist Eddie Condon’s name, which also produced the original recording of Bud Freeman’s tenor saxophone showcase, The Eel. In addition to his presence at the keyboard, Hill composed and/or arranged the other items. His writing skills undoubtedly enabled Hill to survive the ravages of the Great Depression more comfortably than most musicians. As a freelance, commissions for the prestigious Paul Whiteman Orchestra ensured his work maximum exposure. Alex Hill’s appointment as staff arranger to Mills Music in 1934 carried certain fringe benefits, because his boss, Irving Mills, also happened to be the nominal leader/manager of Mills Blue Rhythm Band and the manager of the Duke Ellington Orchestra. Apart from the singular honor of writing for the latter, in early 1935, Alex Hill received the accolade in being asked to deputize for a briefly indisposed Ellington. Having formed his own band in early 1936, specifically for an engagement at New York’s Savoy Ballroom, a few days after opening there, Hill was forced to disband through ill health, which signalled the end of his career. His final months were spent at the family home in Little Rock, where he died in February 1937. from http://www.redhotjazz.com