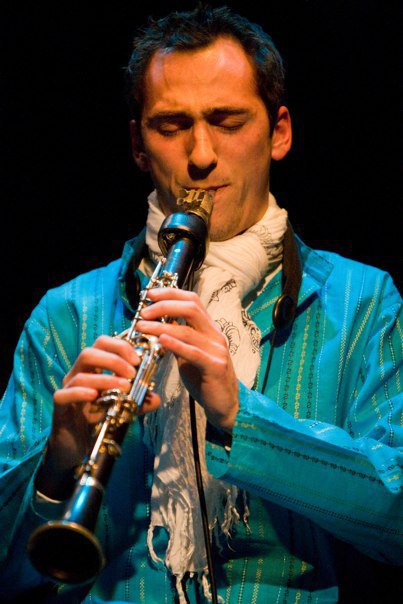 Alex Simu is a clarinetist and saxophonist who has been internationally recognized. Simu was born in Romania and began his music education at a young age. He moved to the Netherlands in pursuit of a career in international music at 22. He was awarded an HSP Huygens scholarship in 2007 to attend the Manhattan School of Music. He was awarded the Utrecht Holland Casino Jazz Contest’s First Prize in 2008. He also won the first prize in the Dutch Jazz Competition in Rotterdam in 2008. In 2009, he was awarded the EBU Jazz Scholarship and became a member the European Jazz Orchestra for Swinging Europe, led by Peter Herbolzheimer. Alex Simu founded the Dutch-based quartet Arifa after completing his studies. Their debut album Beyond Babylon was published in 2010. Anatolian Alchemy followed in 2012. Both albums received the Best World Music Release Award in the Netherlands and were awarded 5 stars by different publications. Echoes of Bucharest was Alex Simu’s debut album as a bandleader and his first album with his quintet. National press praised the release at Bimhuis Amsterdam. Alex Simu is also a film music composer and has been involved in many award-winning international films since 2010. The Dutch Film Academy awarded Simu the Golden Calf for Best Music Beyond Sleep in 2016. Simu has been the main subject teacher in the Codarts University for the Arts Rotterdam’s jazz and world music departments since 2015. Simu is an active participant in clarinet synthesizing and organology. He has also invented the tenor clarinet and brought the clarinet-d’amour, alto clarinet and bass clarinet into modern use. Alex Simu has been active in jazz and world music since 1999. He performed professionally in 41 countries across 5 continents and was accompanied by important musicians such as Alvin Queen and Bennie Wallace, Bennie Wallace and Peter Herbolzheimer. From www.alexsimu.nl