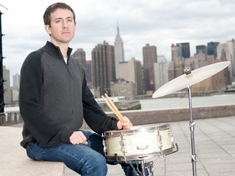 Alex Wyatt, a New York-based drummer and composer is his name. He is originally from Littleton in Colorado and grew up playing around Denver with his friends as a teenager. He also studied under Paul Romaine, a local jazz legend. In 2001, he moved to New York to study at The New School for Jazz. He has been well-respected for his musical abilities. Alex is currently performing in New York with the jazz groups Common Quartet and Alex Wyatt Group. You can see him with The Midtown Men and pop group WYATT. He is also a singer/songwriter and part of the pit orchestras at various theaters. Wyatt is currently on tour with The Midtown Men. This band features the original four Jersey Boys cast members. The Midtown Men recently completed their fifth national tour, culminating in a concert at New York City’s Beacon Theater. Guests included Petula Clark, Shirley Alston Reeves from The Shirelles and Gene Cornish from The Rascals. Wyatt toured the Czech Republic, Austria and Italy for three and a half weeks in 2012 with Rudy Linka, a noted jazz guitarist. Some of his other past experiences include touring with jazz and theatre groups in Japan, South Korea and China, performances at New York’s Birdland and The Bar Next Door, 55 Bar and The Fat Cat, The Living Room and The Bitter End, as well as recordings with many artists. Alex has also released an album with his own compositions, entitled There’s Always Something. Alex is also a teacher and has a bachelor’s degree from the New School for Jazz, New York City. Visit www.alexwyatt.net