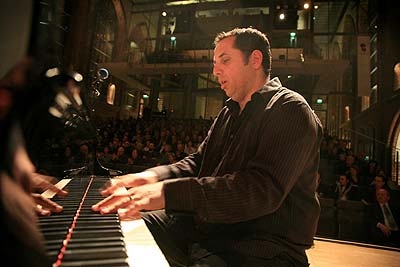 Pianist & composer Alon Yavnai was born in 1969 in Israel, where he was raised and had his formal musical studies. He started performing professionally at early age. When he was twenty-two years old Alon moved to the United States. Since then he has toured worldwide, recorded and performed with numerous artists such as Yo-Yo Ma, Nancy Wilson, Freddie Hubbard, Joe Lovano, The New York voices, Bob Moses, Rosa Passos, Claudio Roditi, Romero lubambo and for almost seven years was part of Paquito D’Rivera’s latin Jazz Quintet, Jazz Chamber trio and performed many times together as a duet. In addition to recording with vast array of artists in different genres he has released three albums of his own. He has recorded with the Zurich Symphony Orchestra at Tonehalle concert hall in Zurich and performed as a soloist with the Colon Theater Philharmonic Orchestra in Argentina as well. Other appearances include Carnegie Hall, Library of congress & Kennedy Center, as well as several festivals around the world and jazz clubs such as the Blue Note & Birdland in New York. Between 2009-2010 Mr. Yavnai was living in Israel where he was teaching at the Hebrew University in Jerusalem, and completing his masters in composition alongside with his performing career. At the beginning of 2012 Alon is planning on releasing his big band album with his original compositions and arrangements, which was recorded in Hamburg with the renowned NDR Bigband. The album will be released on Alon Yavnai Music. Also next year a solo piano album is in the plans. Currently Alon lives in New York. In addition to his performing activities and artist in-residence workshops that he gives in different universities. Alon is an associate professor at Berklee College Of Music in Boston.