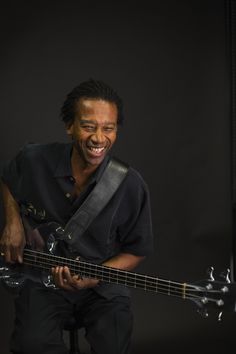 Alphonso started out as a horn player but would later switch to the bass when he was in his twenties. Alphonso began his career in the early Seventies as an electric bassist. He was one of the few electric bassists who showed innovation and fluidity when playing the electric bass. After sessioning with some jazz musicians, Alphonso was offered the Weather Report job as a replacement for Miroslav Vitous, his co-founding member. Alphonso’s smooth, yet authoritative bass lines placed him in the same class as Stanley Clarke and Steve Swallow for being one of the most promising bassists of the 1970’s. His brilliance was evident from the start with Weather Report’s Mysterious Traveller songs such as “Cucumber Slumber”, and “Scarlet Woman”. Alphonso would be on two more Weather Report albums before he left the band to join Billy Cobham, a drummer extraordinaire. Alphonso was also the first musician to introduce the Chapman Stick the public. Text contributed by users is available under Creative Commons By–SA License. It may also be available under GNU FDL.