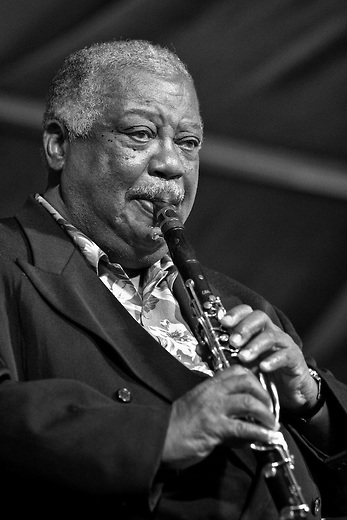 Alvin Batiste has been regarded as one the most important instrumentalists of all time. His performances include concerts at Carnegie Hall, Lincoln Center and Sweet Basils in New York, as well as the Bottom Line in New York, the Theatre Boulange in Paris, and the Joe Papp Theatre in New York. He has performed in Europe, Canada, and the United States. He has performed in concert in Mali and Togo, as well as on tours of West Africa. Large audiences were always drawn to the clarinetist’s performance at the New Orleans Jazz and Heritage Fair. The Evolution Hall Label’s early 1990’s recordings of his live recording at Snug Harbor, New Orleans are some of the most iconic recordings. Historic albums Batiste made with the Clarinet summit are here. Two albums were also prepared for India Navigation Label release, along with Jimmy Hamilton, John Carter and David Murray. After the Clarinet Summit performed at Emory University, Black Saint released an Atlanta recording session. The clarinetist has recorded sessions with Billy Cobham, Julian Cannonball Adderley, and Freddie Hubbard, both on CBS and Fantasy. Wynton Marsalis has released two albums featuring him. The clarinetist first recorded Jazz was with the American Jazz Quintet, which included Ellis Marsalis and Harold Battiste. Batiste toured France with the Arne Williams All Stars, Portugal and Norway. from http://www.alvinbatiste.net