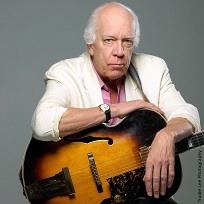 Amos Garrett is regarded as one of Alberta’s top guitarists. His reputation, which he has built over the past four decades, extends far beyond Alberta’s geography, and reaches into the United States and abroad. Garrett curls up on his plush sofa with his 14-year-old dog Maggie. It is located in his country-style living room in High River, AB. One quickly realizes that despite his musical accomplishments, Garrett lives a quiet life. He enjoys fly fishing, bird hunting, and training bird dogs. Garrett was born in Detroit and raised in Toronto. He took piano and trombone lessons but found neither one of them suited him. Then he discovered the guitar at age 14. Garrett started gigging within a year. “I was just able to take to the guitar, it fit me well and I guess that I had moved past my awkward teenage years. Garrett recalls that I started playing guitar within one year. Garrett is well-known as a jazz and blues guitarist, but his eclectic playing style has allowed him to transcend the genres that are closest to his heart. He’s now a country-rock, pop, and folk musician. “Back then, everything was rock ‘n roll. Garrett explains that we didn’t call things blues, rhythm andblues, or rockabilly. It was all rock ‘n roll to us.” He recalls 1954 being “the year that rock arrived” and launching artists like Chuck Berry, Bo Diddley, and T. Bone Walker into a new era. Garrett started learning about the early acoustic Delta Blues players of the 1930s, such as Leadbelly and Robert Johnson, by the time he was in college. While Garrett was busy developing his sound and playing in bars in Toronto, such as the Dirty Shames, which also featured Chick Roberts and Jim McCarthy, Sylvia Tyson, an acoustic folk pair, were creating a new sound. Garrett says that Sylvia and Ian Tyson were the ones who gave him his first break and ticket to America. Garrett was brought to Nashville by the Tysons to record their new band Great Speckled Bird and to tour for the next two years. Garrett quickly developed his own technique, which he still teaches online to students. Garrett was able to sound like a pedal steel guitarist, but he is still a jazz musician. “Amos can do that multi-note string bend like nobody …. A dozen studio musicians can play your disc and you can pick his solos without any difficulty. “Totally unique,” says Tim Williams, a Calgary bluesman. Garrett was a proficient guitarist and could be hired as a musician for any band. Over the next few years, he rose through the ranks of the guitar and contributed to music history. He formed a band with Geoff Muldaur and Maria Muldaur to play guitar in the band Better Days of Paul Butterfield, a virtuoso guitarist and harmonica player. Later, he reunited with Maria Muldaur to be her guitarist and band leader. It was a decade later that he decided to leave Muldaur to start his own band. Garrett is the guitarist who played the famous solo guitar in Maria Muldaur’s 1974 hit, “Midnight at the Oasis.” Garrett says that he loved singing but couldn’t sing as a hired gun for bands. He has had a long and successful career, sharing the stage with many other artists like Emmylou Harris Bonnie Raitt, Stevie Wonder, Anne Murray, Stevie Wonder, Stevie Wonder, Stevie Wonder, Bonnie Raitt, Bonnie Raitt, Stevie Wonder, Stevie Wonder, Anne Murray, and Stevie Wonder (with whom he recorded her first five studio albums). Garrett has recorded with more than 150 artists over the years. Since 1980, Garrett has been managed by Holger Petersen from Stoney Plain Records in Edmonton. Garrett refers to Petersen “the patron saint for roots music in this nation.” Petersen replies, “It has been an honor and an education for myself to represent Garrett over these 30 years.” As a relative newcomer in the music industry, Amos allowed me to represent him internationally as well as be part of his musical circle. “I’m proud of how we’ve worked together so long.” Garrett, who moved to Alberta in 1989, is busy with his acoustic band, blues band, and jazz trio. Garrett’s most active band is The Amos Garrett Jazz Trio. He gigs on a regular basis, and is looking forward to recording the next few months. Garrett says, “It’s nice not to perform too much and let things get stale.” He likes the idea live recording gigs, letting jazz’s improvisational qualities shine through. Garrett’s most recent recording, “Get Way Back”, (2008), features the guitarist/vocalist taking a look back at the blues in a tribute to Percy Mayfield. It was praised by the best in music. Percy Mayfield’s career in performance was prematurely ended in 1952 after a car accident. However, this blues singer led a successful career as an songwriter until his death in 1984. Mayfield is most well-known for his work as a songwriter with Ray Charles, including hit songs like “Hit the Road Jack”. Garrett is planning to do a reunion tour in Japan with Geoff Muldaur (a friend from the Jazz Trio), which Garrett loves. from http://www.melmusic.com/amos_garrett