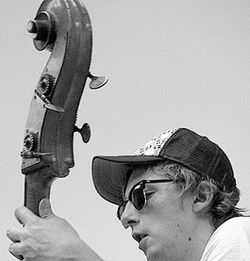 There are many fine Danish bassists on the market. Anders Christensen, however, is a hunted man. People with recording offers, solo and group tours in various genres hunted him down. Anders Christensen, also known as AC, is a busy man. He released his solo album “Dear Someone”, featuring Aaron Parks on piano and Paul Motian on drums. He can switch between rock and jazz, and performs with Caroline Henderson (whose most recent hit album he produced). He was once a member The Raveonettes and just recorded for ECM as trumpeter Tomasz Stanko. He also used to be a regular in Paul Motian’s band. He is Jakob Bros’ bassist and Jakob Dinesen trio’s drummer, and has recorded with George Garzone. Lee Konitz recently recorded and performed with him, Joe Lovano, and Tom Harrell. Visit www.sundance.dk