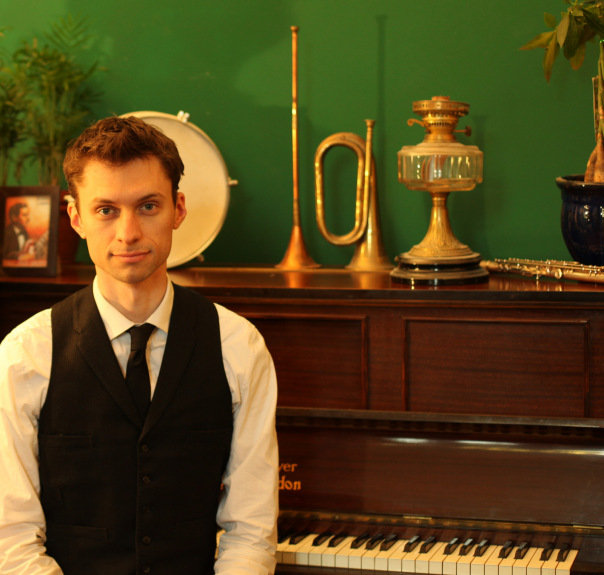 Andrew Oliver is a composer, pianist, and occasionally trumpeter from Portland, Oregon. At the age of three, he began playing piano. He also learned cello and classical piano as a child before moving into improvised music in high school. From 2002 to 2005, he lived in New Orleans where he studied jazz at Loyola University. He returned to Portland in 2005 after evacuating from Hurricane Katrina.
The original Andrew Oliver Sextet, which he founded, released two albums to high praise in the Northwest (“Otis Stomp”, on Diatic Records, and “82% chance of rain” on OA2, before dissolving in 2010. Andrew was part of the U.S. State Department’s “Rhythm Road to American Music Abroad” program. He traveled to Africa in 2007, and founded The Kora Band. This group is based in Seattle, and features Kane Mathis, a West African traditional harp with a 21-string string. “Cascades” (OA2 Records), the second album, was named “2010 NW Jazz Album Of The Year” by Earshot Jazz. It peaked at #12 in the U.S. World Music Radio Charts. The Kora Band continues its West Coast tour and is currently recording another album for the fall 2012.

Andrew was awarded a scholarship to the Banff International Workshop for Jazz and Creative Music in 2009. Andrew, five other musicians from Canada and the U.S. met at the Banff International Workshop in Jazz and Creative Music in 2009. They co-founded Tunnel Six. The group has since toured Canada twice, the U.S., and made appearances at Eastern Canadian festivals. Their debut album, “Lake Superior”, was released in 2011 by OA2 Records with support from the Canada Council for the Arts and the Portland Regional Arts and Culture Council. Andrew composed the title track and was awarded an ASCAP Young Jazz Composer Award in 2010.

Andrew was awarded a Fellowship by the Oregon Arts Commission in 2011 and a Career Opportunity Grant, which allowed him to travel to New York to study with John Hollenbeck. This fortunate opportunity had a significant impact on the score he composed for the 1966 Japanese film, “Gamera vs. Barugon”, which was commissioned in part by Portland’s FILMUSIK. It is an organization that pairs new music with older films. His trio, The Ocular Concern, performed the score. They have been performing in Portland for 2 years.

Andrew is also the founder and co-executive Director of the Portland Jazz composers’ Ensemble, an Oregon 501(c),(3) non-profit. The ensemble commissions new music by local jazz composers for a 14-piece ensemble. It also works to promote jazz and other creative music creation in the region.

Andrew is also a member of the New Orleans-born Devin Phillips’ raucous swing band The Bridgetown Sextet. He plays trumpet with The Krebsic Orkestar (a Balkan-style brass band) and composes and performs with the Alex Krebs Tango Quartet. This creates new music to support the vibrant tango dancing scene.