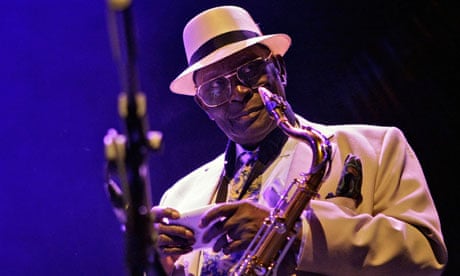 Andrew Raphael Thomas Hamilton was a saxophonist, bandleader, and born 26 March 1918. He died on 3 June 2012. In 1949, Andy Hamilton, a Jamaican tenor, was faced with a difficult decision. He had achieved great success as a musician, entertaining Noel Coward at the Titchfield Hotel in Port Antonio. Then, Errol Flynn hired him to lead his band for parties on his yacht. However, his personal life was in turmoil and he needed to escape. He moved to Britain with his peers of his generation, becoming a prominent jazz musician and a leader in the fight for Caribbean self determination. He fled without warning and hid on board a bananaboat, arriving in England as a stowaway. He was sentenced to a 14-day term for the misdemeanour and went on his search for his countrymen. He was shocked at the results: many were living in terrible conditions, while others had to resort to desperate means of survival. He decided London wasn’t for him and headed to Birmingham, where there was a lot of work. He was able to find factory work, and he played there with several Jamaican musicians, including Dizzy Reece, the trumpeter, and Sam Walker, the saxophonist. However, when he left for London, he was treated with contempt and indifference by the jazz community of Birmingham. He was refused permission to play at one session and he went home. He sat down, wept, and walked out of the house. He put his saxophone underneath the bed and forgot all about music. At the Good Companions in the local pub, where inter-racial social events were organized by a South African physician under the Black and White Club’s umbrella, he made a lasting friendship to Ron Daley, a Jamaican RAF veteran and pianist (stage-name Sam Brown). They were already playing together in West Indian Modernists by 1953. Subscribe to the Sleeve Notes email for music news, bold reviews, and unexpected extras. Read more Local women attended the events at the Vittoria in Hockley and both men and their wives met there. Hamilton, who would have 10 kids with Mary, a nurse and was credited for creating the environment that allowed mixed marriages to flourish in difficult times. He was attacked at the bandstand and became the victim of hate-mail and racists. He stood firm and helped to build the foundation for the multicultural Birmingham. He was awarded the freedom of the City in 1990 in recognition of his efforts in community relations. In 1996, he received an honorary MA degree from the University of Birmingham. He was born in Port Maria, Jamaica, to Michael Hamilton and his wife Miller. In his childhood, he formed a singing group. His first instrument in boy scouts was a cornet. His father bought him a tenor and he played the trombone, tuba, and with a Salvation Army group. His models were American jazz musicians that he had heard on the radio. He travelled to America as a migrant worker in 1944, just like many Jamaicans. He also found music work in New York’s upstate, and also met Louis Jordan and Duke Ellington. He brought back Body and Soul and It’s the Talk of the Town from Coleman Hawkins. “He was the one who baptized me.” In the 1980s, I was talking to a neighbor about Hamilton and she confirmed that he was the first choice for all Birmingham West Indian functions. His weekly pub sessions featured local jazz stars as well as American jazz musicians like Dudu Pukwana, Gary Crosby and Nana Tsiboe. He also put on his own dances, educated children through his big band, workshops and put on his own shows. He was still a mystery outside of the Midlands. In 1990, I interviewed him and recommended his band to a national newspaper. World Circuit Records released a well-received recording that featured Marc and Graeme, his sons as musicians, and other saxophonists like Andy Sheppard and David Murray. He was able to travel extensively, appear on television, and was often the subject of student projects and articles. Hamilton’s playing was warm and original at its best. Hamilton was influenced by early saxophone masters, but he moved with times. His later work displayed an intriguing mixture of elements from Hawkins as well as John Coltrane. His delivery and aesthetic were influenced by the calypso and mento rhythms. He was awarded the MBE in 2008 and continued his success until recent times, inspiring new players and never looking or sounding less than perfect. Mary, eight of their children, and five children from Jamaica are his survivors. From www.theguardian.com