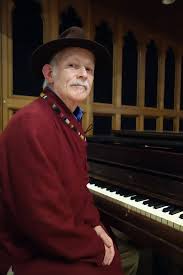 Jaffe, Andy (Andrew William), jazz composer and educator; b. Washington D.C., 16 November 1951. He grew up in D.C., Monroe, N.Y., and Amherst, MA. His father, Howard Jaffe (1919-2002), later to become a professional mineralogist, played piano and wrote musicals with Oscar Brand while at Brooklyn College. His great uncle, Archie Gottler (1896-1959), was a successful Tin Pan Alley composer whose music was performed on Broadway by the likes of Sophie Tucker. His greatest hit was “America, I Love You,” originally composed during WWI (ca. 1915), then revived in WWII by the Claude Thornhill Orchestra, as arranged by Gil Evans. His brother, Stephen (b. 1954), teaches at Duke University and is a well-known composer of new music. His sister, Marina, studied oboe at Oberlin College and currently works teaching music and as a freelance performer. Andy Jaffe began playing the piano at age 8, and then clarinet shortly thereafter, subsequently switching to bassoon, which he played and studied for the ensuing 17 years. He first studied piano classically, but soon abandoned that format in favor of aurally based self-instruction, playing in neighborhood bands beginning at age 10, in Monroe, N.Y., where his family had moved in 1957. They moved again in 1965 to Amherst, Mass., where he attended high school, graduating from Amherst Regional High School in 1969. It was during high school that he began self-instruction in jazz piano and electric bass, and had his first experience transcribing records and arranging music for various dance bands. He graduated St. Lawrence University in 1973 with a degree in political science. His stint at St. Lawrence included a year and a half at the University of Geneva, where he continued to perform with various small ensembles. While in Europe he stud ied Jazz Piano in Paris with the Martiniquean pianist Michel Sardaby. In 1974-75 he attended the Berklee College of Music in Boston and studied composition privately with Dr. Hugo Norden. From 1975-77 he was in Graduate School at UMASS, Amherst, working as assistant director of the Jazz Ensemble while assisting two of his important mentors, Professors Max Roach and Frederick Tillis. He got his M.M. in theory/composition, 1977. He co-led a big band from 1986-’92 with Bill Lowe. Jaffe has been a leader in jazz pedagogy for over twenty-five years, having taught at the Berklee College of Music (1977-81); The University of Massachusetts, Amherst, graduate program in Afro-American Music and Jazz (1994-98); the Institut Musical de formation Professionelle in Nimes, France(1984); Amherst College (1987-99); Tufts University(1992-93); Smith College (1997-99), and currently at Williams College (since 1989), where he serves as Lyell B. Clay Artist-in-Residence in Jazz and Director of the Jazz Program, as well as Artistic Director of the Annual Williamstown Jazz Festival. He has been a guest Artist and Lecturer at the Bratislava Conservatory (Slovak Republic), University of Aukland (New Zealand), Brown University, the University of Kentucky, Wesleyan University, the University of Maine, the National Conservatory in Valletta, Malta, the DoDD School System in Germany, and is a frequent presenter at the International Association of Jazz Educatorsi annual convention, having lectured and performed there in Atlanta (on the Composition Techniques of Duke Ellington); New Orleans (on the music of Hermeto Pascoal — these articles are published in the IAJE “Research Papers”, edited by Dr. Larry Fisher); and in New York (leading an octet in a performance of his own compositions, for which he was given an award for “Outstanding Service to Jazz Education”). He has been a member of the Community Advisory Board of the Fine Arts Center at the University of Massachusetts, where he also served until 2002 as an Associate Director and Faculty member at the annual Jazz in July Summer Program, working with Sheila Jordan, and has recently joined the editorial board of the University of Michigan Press jazz book series, led by Lewis Porter. He has twice won Fellowships in Composition from the Artists Foundation. He has written hundreds of original compositions and arrangements for a range of instrumental ensembles, from piano solo and duo pieces to works for Jazz Orchestra. From 1986-93 he co-led with Bill Lowe the Bill Lowe-Andy Jaffe Repertory Big Band, for which he was the principal arranger. There are hours of unreleased tapes of live performances of the band, as well as of various other ensembles which he has led over the past 25 years. He recently completed arrangements of the music of Thomas Chapin for String Quartet and Jazz Quartet. He has arranged for vocalists Kitty Kathryn and Semenya McCord, the Coltrane Big Band, which was co-led by Archie Shepp and the late Majid Greenlee, and has arranged for Walter Robinson’s Gospel Opera “Oh What a Wonder Jesus has Done.” As a performer he has worked with various ensembles, including the Greg Hopkins Big Band, The “Kings Singers”, and saxophonist Bill Barron. The Williamstown Jazz Festival, of which he is artistic Director, is a collaborative venture featuring dance, film, concerts, and an annual Intercollegiate Jazz Festival which brings together regional college and University ensembles from throughout the Northeast for two days of adjudicated performances. Concert artists brought to the Annual Festival have included or will include Kenny Barron, Wynton Marsalis and the Lincoln Center Jazz Orchestra, the Mingus Big Band, the Vanguard Jazz Orchestra, the Clayton Hamilton Band, Regina Carter, Dr. Billy Taylor, Tom Harrell, and many others. from www.jazz.com