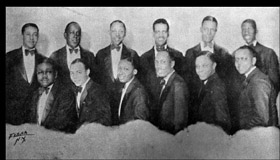 Andy Kirk, a Terrence Holder Orchestra member, took control of the orchestra in 1928. He renamed it Andy Kirk and his Dark Clouds Of Joy, and then Andy Kirk with his Twelve Clouds Of Joy. The band became one of the most well-known and successful bands in the territory, with a career that lasted over twenty years. Mary Lou Williams rose in prominence with the band. In 1929, when the regular pianist was ill, she recorded her first recording with them. Her husband John Williams, who played the saxophone in band, suggested that she replace him. She joined the band in 1931 and continued playing with them until 1942. 1936 saw the band have a huge hit with “Until the Real Thing Comes Along”, and another in 1942 with “Hey Lawdy Mama”. From www.redhotjazz.com