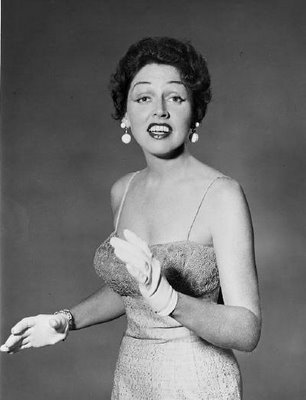 Few female singers could match Anita O’Day’s hard-working and tireless vocal abilities in jazz vocals. Although she was outsung by three or four other singers in quality, her superb improvisation, wide dynamic tone and rhythmic sense made her one of the most popular female singers of her generation. O’Day’s debuts in a big band broke the stereotype of a female singer who was reserved. She was just as energetic as the musicians and could be heard singing with Roy Eldridge on Gene Krupa’s “Let Me Off Uptown”. She made her solo debut in mid-’40s. After that, she began to incorporate bop modernism into the vocals. Over a dozen of her best vocal LPs were recorded for Verve in the 1950s and 1960s. Although she was severely affected by her drinking habits and drug addiction during her peak years, she recovered and continued singing well into the new millennium. She was born Anita Belle Colton, a Chicago native, and she entered her first marathon-dance competition as a teenager. She traveled a lot and returned home quite often. Later, she switched from dancing to singing at contests. O’Day was a victim of bad experiences, including brief stints with Benny Goodman’s and Raymond Scott’s. In 1941, Gene Krupa’s band included O’Day. Krupa hired Roy Eldridge as a trumpeter, and they became an effective trio, with hits such as “Let Me Off Uptown,” Boogie Blues, and “Just A Little Bit South Carolina.” After a short time away, she returned to Krupa to play with Woody Herman. However, the band broke up in 1943. She starred in Stan Kenton’s 1944 hit “And Her Tears Fllowed Like Wine” after she moved to Stan Kenton. Her solo debut was predicated by another stint with Krupa. In 1946, with John Poole as her drummer, she recorded a modest hit with the novelty “Hi Ho Trailus Boot Whip.” After her 1955 album Anita, also known as This Is Anita, her career took off. She was much more successful in jazz than in pop, performing at jazz festivals and concerts that were jazz-oriented, with artists like Louis Armstrong, Thelonious Montk, and George Shearing. After her performance at the 1958 Newport Jazz Festival, she became famous worldwide through a film called Jazz on a Summer’s Day. Anita O’Day Swings Cole Porter and Billy May O’Day’s almost 20 Verve albums during the 1950s and 1960s made her one of the most innovative, trend-setting and successful vocalists of that time. She was arguably only second to Frank Sinatra or Ella Fitzgerald. There were many arrangements she worked with and different settings. She had a number of collaborations with various arrangers, such as an Anita O’Day Swings Cole Porter With Billy May (Anita O’Day Sings Cole Porter With Billy May), a set with the Oscar Peterson Quartet (“Pick Yourself up, Anita”), a performance with the Buddy Bregman Orchestra (“Pick Yourself up, Anita”), a Latin date with Cal Tjader (“Time for Two”), as well as well as the Blue Note trio “The 3 Sounds” (Collaborative LP) with the Blue Note instrumental group the 3 Sounds). Her ebullient voice began to sound tired by the early 1960s. Her heroin addiction and the lifestyle that accompanied it, as well as a constant concert schedule, led to her physical collapse in 1967. After a long struggle to overcome her drug and alcohol addictions, she returned to the 1970 Berlin Jazz Festival. She released a flood of studio and live albums. Many were recorded in Japan, and some were released by Emily Records. In 1983’s High Times, Hard Times, her autobiography was honest and open about her colourful past. O’Day continued to record throughout the 1970s and 1980s, despite her vocal decline. She was still a powerful, energetic singer on stage as well as in recording. O’Day appeared very rarely in the 1990s as her voice began to slow down. In 2006, she reemerged with an album called “Indestructible!” She had recorded the album in the preceding two years but died in November from advanced Alzheimer’s disease and pneumonia. Allmsuic