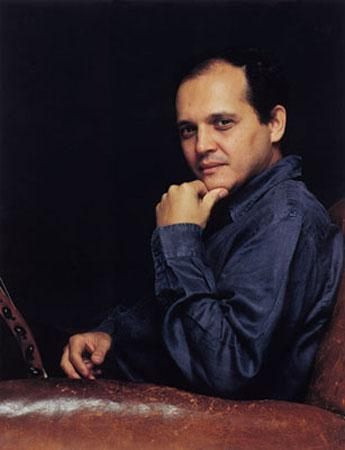 Anouar Brahem’s playing has revolutionized the role of the oud, an Arabic, lute-like stringed instrument. Brahem uses the oud as a solo instrument, instead of being used to accompany singers in the past. Tunisian newspaper “Tunis-Hebdo” wrote in 1988 that “If we had to choose the musician of the 1980s, we would without any hesitation have chosen Anouar Brhem.” According to “The Guardian”, Brahem is “at the forefront” of jazz, a British newspaper. Brahem started studying the oud at age ten with the encouragement of his father, a music-loving musician. He studied for almost a decade with Ali Sitri, an influential oud player. He was able to play well enough to be able perform with local orchestras by the age of 15. Brahem began his career focusing on Arabic music but he started to incorporate elements of jazz into his repertoire. This was accentuated during his six-year stay in Paris (1981-1987), where he performed at festivals and collaborated with Maurice Bejart to create “A Return To Carthage”, which won the prestigious “National Award Of Excellence In Music”. Brahem returned to Tunis in 1987 and performed in the multi-artist production “Ligua 85”. Braham was appointed director of Ensemble Musical De In Ville De Tunis shortly after. Brahem split the ensemble into smaller groups over the two years he was in charge. He directed “Leilatou Tayu”, “El Hizam El Dhahbi” and other productions. Brahem quit his job in 1990 to concentrate on his own career. After touring the United States and Canada, Brahem met Manfred Eicher and was signed to his German record label ECM. Eicher is also the producer. His 1991 debut album “Barzakh”, was recorded with Turkish musicians Bechir Selmi, and Lassad HOSNI. German music magazine “Stereo” wrote that Brahem is “an exceptional musician and improviser.” Brahem’s second album “Conte De L’incroyable amour”, which was released in 1992, was recorded by Barbaros Erkose, a clarinet player. Brahem recorded “Madar” in 1994 with Jan Garbarek, a Norwegian saxophonist, and Shaukat Hussain, a Pakistani tabla player. Brahem’s fourth album “Khomas”, which was released in 1995, featured Brahem’s improvised interpretations, as well as his compositions for Tunisian theater and film productions. It was recorded with Richard Galliano, accordion player, and Bechir Selmi, violinist. Brahem collaborated on his fifth album, “Thimar”, which was released in 1998. It featured Jo n Surman, a bass clarinet and soprano saxophone player, and Dave Holland, a double bass player. Three years later, Astrakan Cafe was released. Brahem composed many pieces for films and musical theatre productions such as “Sabots En Or”, “Bezness”, “Halfaouine”, and “Les Silences Du Palais”, and “Lachou Shakespeare”. He worked with Maurice Bejart and Gabriel Yared to create the Costa Gravas film “Thalassa Mare Novum” and the ballet “Thalassa Mare Nostrum”. From www.allmusic.com