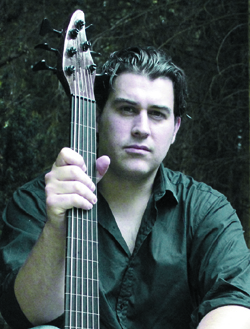 Antoine Fafard, a performer and composer from Montreal (Canada), now lives in London (UK). Antoine is a composer and performer of background music for television. Antoine has been performing on the electric bass since the late 1990s. He is also a composer/arranger with Spaced Out. To date, the band has released five studio albums and performed at international festivals like the Nearfest (USA) in 2002, the Crescendo Festival (France 2006), and the FMPM 2008 (Canada). Antoine rediscovered his classical guitar in 2010, an instrument he had played for a few decades as a young musician, before moving to the bass guitar. Martin Petersen, a London-based guitar maker, gave him a 6-string fretless basse. Antoine was inspired by these two instruments and composed new music that is now available on Solus Operandi. from http://www.antoinefafard.com