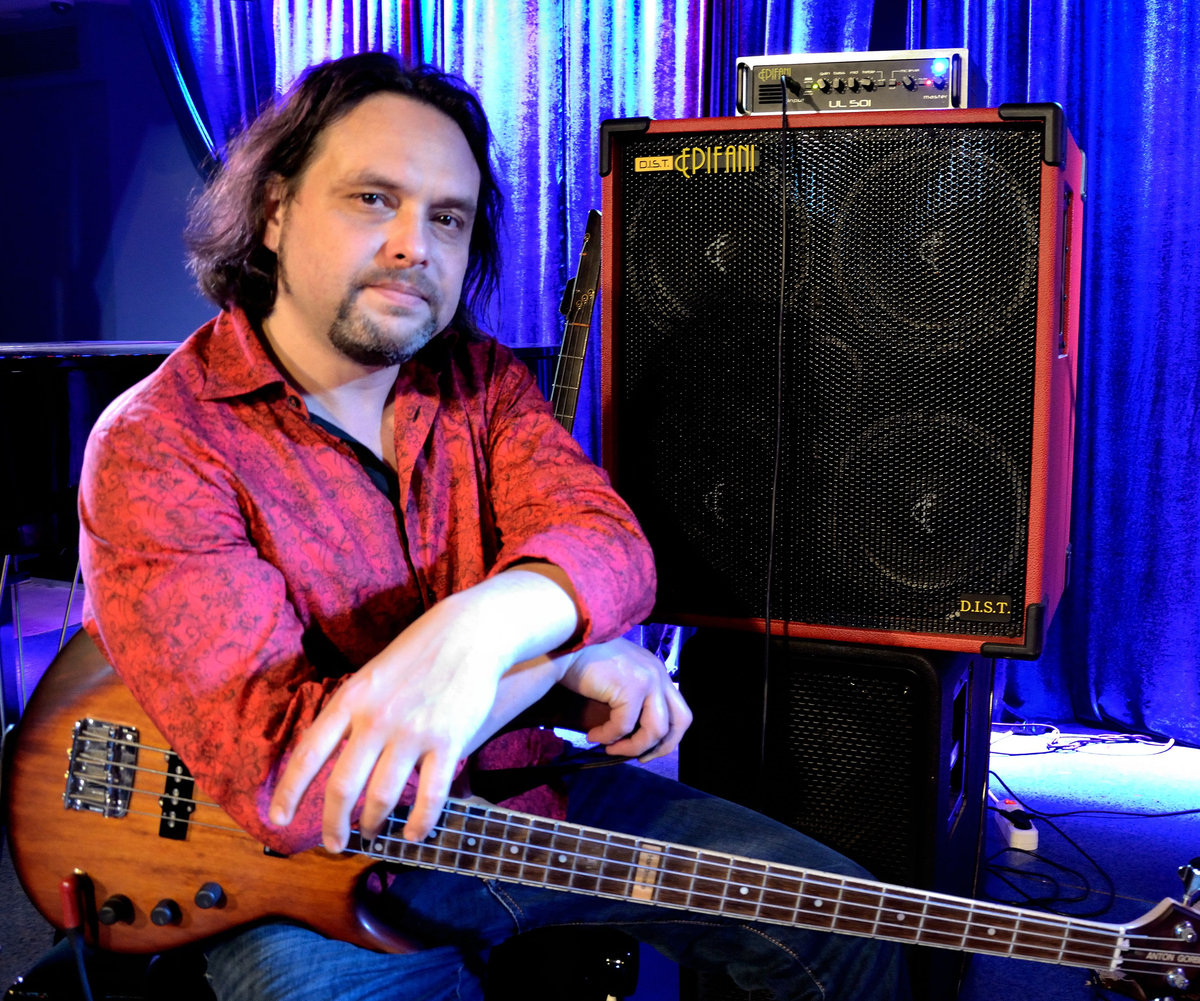 Anton Gorbunov was born in Kurgan, Russia’s Southern Ural on November 29, 1969. He was a clarinetist at the local music school, and graduated in 1994 from the Urals Mussorgsky state conservatory in Sverdlovsk (now Yekaterinburg). He also began his professional career as a clarinetist with the local philharmonic and orchestra of the Opera House. He was also a bass guitarist in local jazz bands. This included the well-known art and fusion band Doctor Faust, which featured prominent Yekaterinburg musicians as well as teachers. After being invited to join alternative pop singer Linda’s band, Anton moved to Moscow in 1995. Anton worked with musicians from many different music genres between 1996 and 2001. He also composed the music for his first solo album. Footprint, one of his tracks, was nominated for the Russian internet music contest’s “bass guitar” nomination. Anton was joined by Igor Boiko, a well-known Russian jazz guitarist. Anton’s bass is also featured on the albums Five and Between The Lines. Anton was also invited to join Valery Syutkin’s band, a prominent Russian pop singer. Anton was also part of Alexander Markov’s music project. He is a US-based violin player and composed a three-part suite for rock and violin. Anton’s solo program is presented at Moscow’s B2 Club. He also launches a series regular concerts in the city’s top jazz clubs, including “Le club”, JVL”, Soul Train and “Jazz Town”. He records and releases Fixed Idea, his solo album, with the Galeo Band. Vladimir Kuzmin, a legendary Russian rock guitarist and singer, offers Anton a place in his Dynamic Band. In 2005, Anton is a session bass player on Vladimir Kuzmin’s Holy Creek album. After Edward Artemiev invited Anton to record the rock opera Raskolnikov, based on Fyodor Dostoevsky’s novel, Anton again showed his versatility. The recording was only released at the end of 2007. The Kremlin Concert, which was one of Valery Syutkin’s most popular shows in 2005, saw Anton participate. Anton worked with many jazz musicians during this time, including guitarist Igor Boiko and Lev Slepner (marimba player), Vyacheslav Gorsky (piano player), Anatoly Gerasimov (saxophone player), guitarist Pavel Chekmakovsky and vibraphone player Sergey Chernyshov. He has collaborated with many musicians in recent years, including Sound Cake, a cover band that plays soul and funk songs, Jazz Aero, and Marimba Plus, an instrumental art and fusion group. Anton performs with Arkady Shilkloper, a well-known horn player, and the band Transatlantik. Anton formed Den Tvorchestva (Day of Imagination), a joint project with a group of like-minded musicians. Anton composed half of the band’s music. Anton participated in the Russian Bazz Day Festivals 2006, 2007, and 2010. Anton was a regular participant in the Moscow’s Usadba Jazz Festivals and Jerusalem’s Jazz Globus between 2006, 2007 and 2010. Anton composes, plays and teaches today. Anton participated in the European Bassday 2007 where he performed his own music and jammed alongside famous European bass players Wojtek Pilichowski, Nathan Williams, and Charlie Moreno. He performed two concerts in 2008 with Joao Donatio, a Brazilian king of boss nova, and Grammy winner. His music was largely influenced by samba rhythms. Donato’s songs were performed by Elvis Presley and Frank Sinatra. Anton was joined by six-time Grammy winner David Sanborn in Moscow for Anton’s 2010 concert. His first Grammy nomination came in 1979 with the release of Hideaway, Sanborn’s fifth album. David met Marcus Miller, a jazz bassist who would later join him on Hideaway’s recording. Voyeur was his 1981 album. David won his first Grammy Award for Best R, with the single All I Need is You.