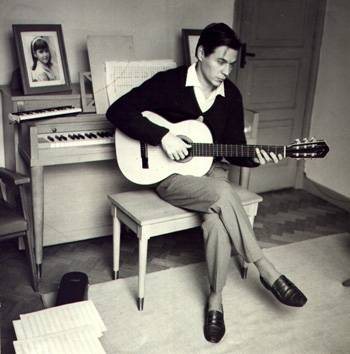 Antonio Carlos Brasileiro de Almeida Jobim was born January 25, 1927 in Rio de Janeiro (Brasil), and died December 8, 1994 in New York City. Also known as Tom Jobim, he was a Brazilian composer/arranger, singer, pianist, and one of the most famous bossa nova legends. The genre was born in the 1960s from Jobim’s compositions. Many of them were performed by Joao Gilberto. Pixinguinha was a legend musician and composer who in the 1930s started the development of modern Brazilian music. Jobim’s roots are solidly planted in his works. Jobim was also influenced greatly by jazz and the music of Claude Debussy, a French composer. Jobim rose to prominence in 1956 when he collaborated with Vinicius de Morais, a poet and writer. This was the same time that Jobim’s music was used in Orfeu de Carnaval (1956), which later became a huge hit in the movie Black Orpheus. De Moraes wrote the lyrics to his most famous songs. American jazz singers Ella Fitzgerald (2001) and Frank Sinatra (1981) prominently featured Jobim’s songs in their albums Ella Abraca Jobim (1981), and Francis Albert Sinatra (1981).