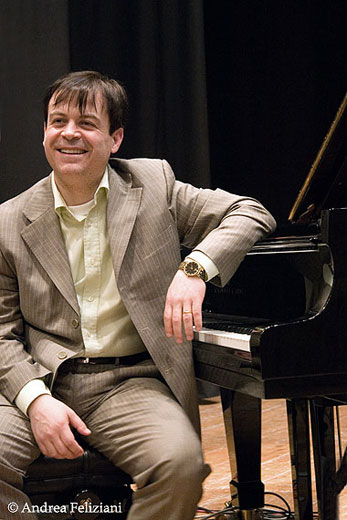 Antonio Ciacca is known for his innovative piano playing and has been a major player on both sides. Ciacca was born in Germany, and raised in Italy. He has been accompanied by such jazz legends as Steve Lacy and Craig Bailey. Ciacca was the founder and music director for the Detroit Gospel Singers. He toured twenty cities in Europe with the group in December 2000. In 1995 and 1996, Ciacca toured Europe together with the Larry Smith Quartet and in 1999 with Joe Henderson, Steve Lacy, and Steve Lacy. In 1998, he performed in Japan with Eiji Nakayama quartet. Ciacca, who has been playing piano since the age seven, was taught by Kenny Barron and Marcus Bellgrave. His 1998 album Hollis Avenue was dedicated to Jaki Byard with whom he had studied in 1998-99. Ciacca has a masters degree in Afro-American musicology, which he received from the University of Bologna. Ciacca is still a major contributor to the development of European jazz. He was the founder of C-Jam Music (a non-profit organization based in Italy that promotes world music), and he also organized and directed the Appennino Music festival in 2001.