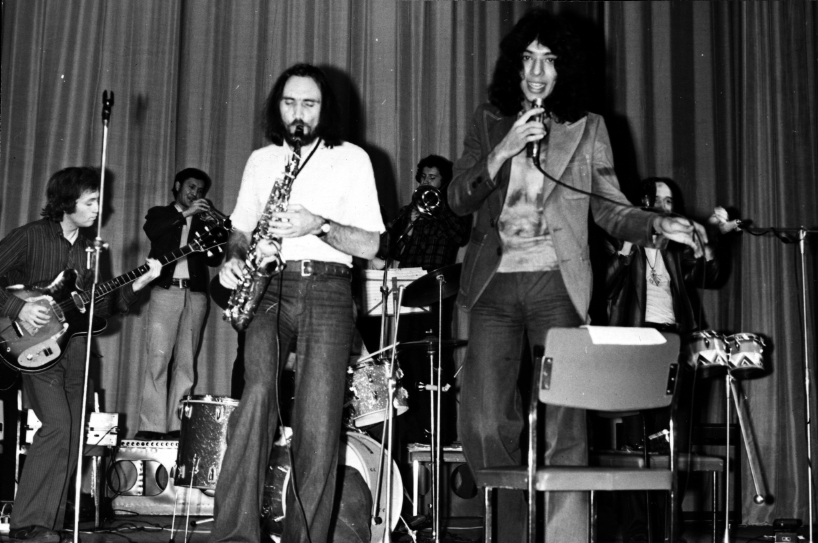 ARSENAL, the pioneers of jazz-rock music in the Soviet Union is a creation of Alexey Kozlov (b. 1935), professional architect, self-taught composer and saxophonist. He was an avid jazz player since the 1950s. He had a deep understanding of jazz’s different styles and participated in many jazz festivals (USSR, Czechoslovakia and Hungary). His reputation in jazz circles was good up until the 1970s. He was an open-minded musician and was always interested in other music styles. After listening to music from bands such as CHICAGO, MAHAVISHNU ORCHESTRA and BLOOD, SWEET u0026 TEARS, PINK FLLOYD and KING CRIMSON, he decided to take a different path and create a band that could play a fusion of these styles. Alexey Kozlov stated that he wanted to form a band of virtuosi who could swing, improvise and enjoy different music styles. It wasn’t easy to find musicians to join a new band. Many jazzmen who were experienced considered rock music to be a joke and not serious music. The Soviet Union’s rock music was still in its embryonic stage and was almost entirely underground. Even the term “rock” was often associated with Western enemies. The official equivalent to rock music was the so-called vocal instrumental ensembles. These professional groups sang “songs by Soviet composers” without any rebellious spirit. Although underground rock musicians were enthusiastic, they weren’t able to play complicated pieces and many couldn’t even read music. Gnesin’s Institute and Moscow Conservatory students were the ones who found the solution. Their interests went beyond classical music. ARSENAL was the name of the band. “ars” is Latin for “art”, and it was also influenced by the famous British football team. The first ARSENAL rehearsal was held on November 12, 1973. The initial line-up included 4 singers and a brass section. Standard rock instruments were also used. The band started performing excerpts from Webber-Rice’s rock-opera “Jesus Christ Superstar”, compositions by CHICAGO, BLOOD SWEET AND TEEARS, TOWER of POWER, and music written and composed by Alexey Kozlov. They quickly became well-known underground. The “Underground Arsenal CD” only published some records from that era. The Ensemble performed occasionally, but they were not paid for them because it was illegal to make money from gigs for artists who weren’t working for an official concert organization. They also intensively practiced. The band members combined music and their studies with their jobs. The situation changed when Kaliningrad Philharmonic invited ARSENAL for a permanent job. This allowed the band to become professional from an official perspective. The Ensemble tours extensively in different cities and towns of the Soviet Union. They also participate in festivals in East Europe and at home. However, they are always under the pressure of ideology machine. ARSENAL was not allowed in Moscow until 1980. The first album, “Arsenal”, was recorded in 1977. It was only published in 1979. Throughout its long career, ARSENAL music has experienced many stylistic changes. Alexey Kozlov began to compose primarily instrumental music towards the end of the 1970s. Vocal numbers are now taking up less space in concert venues. Soon, singers will leave the band for personal reasons such as moving to England or marriage. Alexey Kozlov’s discovery of Oriental philosophy in the early 80s led to a shift in music that is meditative, keyboard-driven and meditative (the 1982 album “Created With Our Own Hands”). The band soon returns to funky-fusion with the album “Second Wind”, which incorporates elements from folk, classical music, and even reggae. In the middle of the 80s, ARSENAL concert programmes include this dance. Break dance moves such as “moonwalk”, “glide” were taught to musicians. Concerts consisted of two sets – one was jazz-rock and the other was break dance with parody to bureaucracy and theatrical elements. Although they were not stage-presented, pieces of the break dance period were included on the 1986 album “Pulse 3”. In strong artistic form, the band released two albums in 1991 called “Arsenal-5” (their most rocking work) and “Arsenal-6”. The fall of the Soviet empire was a difficult time for many artists. Ideological pressure became dictatorship of market economics. The old structures (i.e. Old structures (i.e. Philharmonics) were destroyed while new showbiz was yet to be created. 1991 saw the end of the first band’s era. The Kaliningrad Philharmonic fired ARSENAL. Alexey Kozlov was involved in many projects and released solo albums at the beginning of the 1990s. He then revived ARSENAL with younger musicians when it was possible. This formation is sometimes called NEW ARSENAL. The band is jazz-fusion and creates new music by arranging old songs. ARSENAL and Valery Karimov played “Progressive Rock” live in 2000. This programme featured songs by ATOMIC ROOSTER (KING CRIMSON), YES, LED ZEPPELIN, YES, and other artists. The band also created their own arrangements. Only a few parts of the programme were recorded (on the 2005 “Time Scorched DVD”). The Seventh Incarnation, the most recent studio album, was released in 2004. You can still see ARSENAL every week at the Forte club, Moscow. They continue to play concerts in various venues. Eugene (Progarchives.com). Bio.