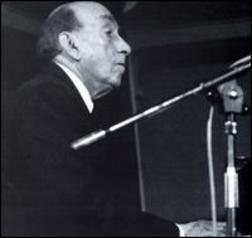 Arthur W. Hodes (November 14, 1904 in Ukraine; died March 4, 1993 in Harvey, Illinois) is an American jazz pianist born in Ukraine. His family settled in Chicago, Illinois when he was a few months old. His career began in Chicago clubs, but he did not gain wider attention until moving to New York City in 1938. In that city he played with Sidney Bechet, Joe Marsala, and Mezz Mezzrow. Later Hodes founded his own band in the 1940s and it would be associated with his home town of Chicago. He and his band played mostly in that area for the next forty years. In the late 1960’s Hodes stared in a series of TV shows on Chicago style jazz called “Jazz Alley”. Here he appeared with greats like Pee Wee Russell and Jimmy McPartland. He also wrote for jazz magazines like Jazz Record. He remained an educator and writer in jazz. His style tended to be traditional and influenced by the blues. This meant he had generally taken the position against bebop in the jazz debates of the 1940s. In 1998, he was inducted into the Big Band and Jazz Hall of Fame. His name is pronaunced “Hodees”. User-contributed text is available under the Creative Commons By-SA License and may also be available under the GNU FDL.