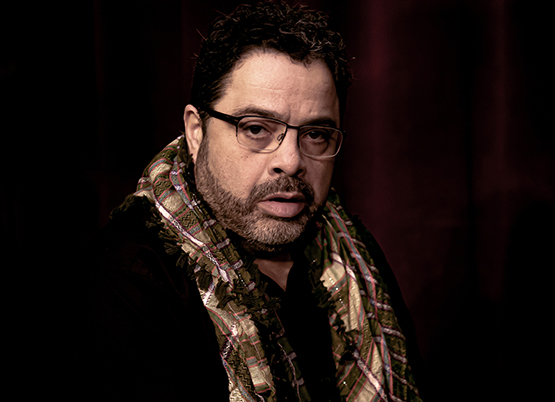 ARTURO O’FARRILL is a pianist, composer, educator and founder of the Afro Latin Jazz Alliance. He was born in Mexico City and grew up here. A large, complex and demanding collection of music in Latin and Afro Cuban Jazz was the reason Mr. O’Farrill founded the Afro Latin Jazz Orchestra for Jazz at Lincoln Center in 2002. Una Noche Inolvidable was his debut album. Song for Chico, the Orchestra’s second album, won a GRAMMY Award for best Latin jazz album in 2009. Mr. O’Farrill and his ALJO band released 40 Acres and a Burro in February 2011. It was nominated to win the GRAMMY Award as Best Large Jazz Ensemble Album. He was awarded the Latin Jazz USA Outstanding Achievement Award 2003.
From 1979 to 1983, Mr. O’Farrill was a pianist with the Carla Bley big band. He received his education at Brooklyn College Conservatory, Manhattan School of Music and Brooklyn College Conservatory. Then he began to perform solo with many artists, including Wynton Marsalis and Wynton Marsalis, Dizzy Gillespie, Steve Turre and Freddy Cole.

Apart from recording nine albums with Milestone Records, 32 Jazz and M&I and Zoho (Bloodlines and A Night in Tunisia), Cumana Bop and Live in Brooklyn, The Jim Seeley/Arturo O’Farrill Quintet and Song for Chico, In These Shoes With Claudia Acuna, Risa Nagra and 40 Acres And a Burro), O’Farrill also appeared on many records, including the GRAMMY-nominated Heart of a Legend and The Orisha Suite and Chico and Chico and Chico and Chico and Rita. Three Jazz at Lincoln Center landmark concerts featured Mr. O’Farrill as a special guest soloist: Afro-Cuban Jazz: Chico O’Farrill’s Afro Cuban Jazz Orchestra in November 1995; Con Alma, The Latin Tinge In Big Band Jazz in September 1998; and 2001 Jazz at Lincoln Center Gala, The Spirit of Tito Puente in November 2001. He was also the featured artist in Jazz at Lincoln Center’s Jazz in the Schools Tour in 2002. His Latin jazz quintet performed more than 50 educational performances to over 10,000 students in NYC schools.

He is an educator who has taught master classes, seminars and workshops all over the globe for both students and teachers. He was the Alan and Wendy Pesky Artist In Residence at Lafayette College. In 2007, O’Farrill was Haystack Mountain School of Crafts’ Visiting Artist. He was assistant professor of jazz at The University of Massachusetts, Amherst from 2007 to 2008, and assistant professor at SUNY Purchase from 2008 to 2010. He is currently a Brooklyn College faculty member.

Over the years, Mr. O’Farrill toured the U.S. and Latin America. He also toured Europe and Asia. In 2006, he led the ALJO’s tour through Mexico. The ALJO quit Jazz at Lincoln Center in 2007 to pursue its own education and performance opportunities. The Afro Latin Jazz Alliance was established to preserve, educate, and perform Afro Latin Jazz.

He is a well-known composer and has been commissioned by Meet the Composer. He has composed music for movies such as Salud and Hollywoodland. He lives with Alison Deane (a classical pianist) and their sons Zachary and Adam, both of whom are accomplished musicians. Steinway Artist, Mr. O’Farrill.