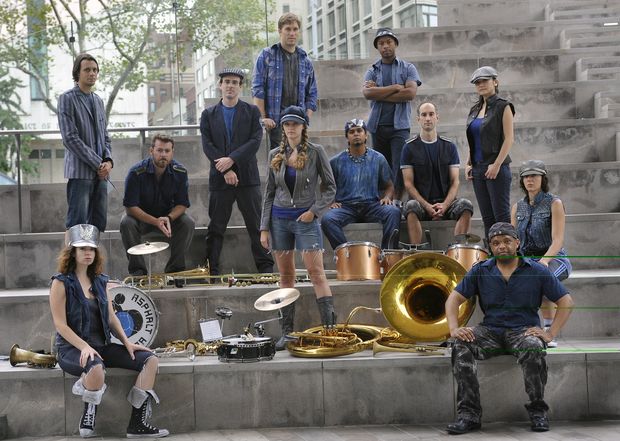 Asphalt Orchestra is an innovative street band that delivers bold processional music to the masses via mobile phones. Asphalt Orchestra was founded by Bang on a Can’s founders (New York Magazine). It unleashes original music from jazz basements, concert halls and rock clubs and then takes it to the streets. The group brings together the best in jazz, classical, rock and rock musicians from New York City. The New York Times named them “12 top-notch brass u0026 percussion players.” Asphalt Orchestra is an outdoor guerrilla musical troupe choreographed and directed by Mark DeChiazza. Unpack the Elephant is the indoor experience, which Andrew Robinson and Mark DeChiazza direct. The group’s wardrobe stylist is Elizabeth Hope Clancy. Asphalt Orchestra’s first performances spanned 10 nights at the Lincoln Center Out of Doors Festival in New York during the summers of 2009-2010. They have been performing all over the US East Coast, Canada, London’s Barbican Centre and at the TED Women conference, Washington D.C., New York City’s Alice Tully Hall, and Metropolitan Museum of Art. Their repertoire includes music by Bjork, jazz legend Charles Mingus and rock prodigy Frank Zappa. They also performed at the TED Women conference in Washington D.C., New York’s Alice Tully Hall and Metropolitan Museum of Art. Asphalt Orchestra was featured on The Philadelphia Inquirer’s cover as “not your mom’s marching band”, and has been featured on Newsweek, The Economist and The New York Times. They have also been praised by The Onion and Time Out New York. Ken Thomson manages the group. from http://bangonacan.org