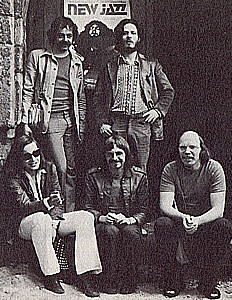 Association P.C. Association P.C. (which means “Association Pierre Courbois”) is a band that played a mix of avantgarde, jazz, and rock music. It was founded in 1969 by Pierre Courbois (drums), Jasper Van’t Hof, and Toto Blanke (keyboards), respectively. It was either Peter Krijnen from the Netherlands or Siggi Busch from Germany that served as the bassist. The first album, “Earwax”, was released under the name Association in 1970. It was followed in 1971 by “Sun Rotation”, and in 1972, live “Erna Morena”. Jasper van’t Hoof left the band to join JeanLuc Ponty’s group. Joachim Kuhn, a German pianist, replaced him. Their third album, “Rock Around The Cock”, was released in 1973. Their final album, Mama Kuku, was released in 1973. It featured live recordings of 1973 featuring American flautist Jeremy Steig. They continued touring until 1975.