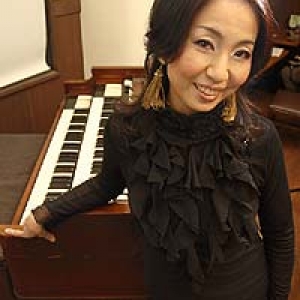 Atsuko was born in Osaka and began playing the organ when she was four years old. Atsuko began exploring the B3 with popular songs, and then started to learn jazz classics like Take the A Train by Duke Ellington. After studying classical music for several decades, she decided to focus her efforts on jazz music and the organ. She formed her own quartet in 1992 at Osaka Jazz Festival, Naniwa Arts Festival. She made her debut in America in 1999, performing at clubs in New Orleans, San Francisco and Pearls Club, where she was joined by Bruce Forman’s band. She shared the stage with Brother Jack Mc-Duff’s band in Japan in 2000, and she performed with Dr. Lonnie at Blue Note Osaka in September 2000. She released her first CD “Jazz Organ Tribute” in that year. Atsuko returned to California in 2001, performing at The Baked Potato in Los Angeles and the San Jose Jazz Festival. Kuumbwa Jazz Center was Santa Cruz. Atsuko also released “Full Organ”, a CD with Yutaka Hashimoto as guitarist and Jimmie Smith as drummer. Atsuko was awarded several awards at the 40th Osaka Naniwa Arts Festival 2003. These included the Shoji Nakayama jazz Award, the Progressive Musician’s Prize and the Osaka Governor’s and Mayor’s Awards. Atsuko’s 2005 album Songs We Love featured performances by Yutaka Hayashimoto and drummer Juasa Kano and features singers Harvey Thompson and Toni Scruggs. from www.prolinea-net.com/atsukohashimoto/index.html