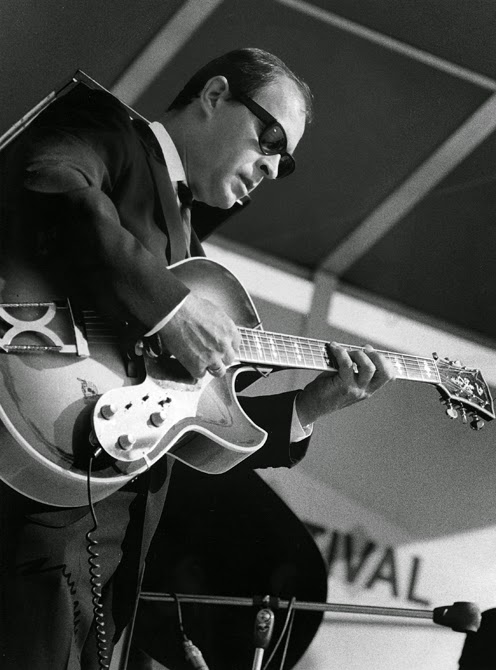 Attila Zoller, a Hungarian-born guitarist, was not a household name. However, jazz musicians who knew him considered him to be one of the best and most original guitarists in jazz. Zoller was initially known for his excellent playing of bop and became a master at free jazz in the 1960s. Zoller’s father was a professional violinist and taught him classical violin as a child. He switched to the flugelhorn in his teens. Jazz bass followed, and then guitar. Zoller left school in the Russian occupation of Hungary after World War II to play professionally in Budapest jazz clubs. In 1948, just before the Soviet occupation of Hungary, Zoller fled Hungary. He carried only his guitar and a few clothes, and hiked across the mountains to Austria. Zoller was made an Austrian citizen and settled in Vienna. There he started a jazz band with Vera Auer, the accordionist. In the 1950s Zoller moved to Germany, where he performed with Jutta hipp and Hans Koller. Zoller was admired by visiting American musicians, including Lee Konitz and Oscar Pettiford. They encouraged him to make the move to the U.S. in 1959 after he won a scholarship at the Lenox School of Jazz. He studied with Jim Hall, and he shared a room with Ornette Coleman. This was where Zoller discovered free jazz. Zoller was a member of Chico Hamilton’s 1960 group and flutist Herbiemann from 1962-1965. Zoller started leading a jazz-influenced free group in 1965 with pianist Don Friedman. He also co-led a group that included Konitz and trombonist Albert Mangelsdorff in 1968. Zoller was a firm believer in traditional jazz forms, including swinging with Red Norvo and Benny Goodman and bopping with Stan Getz. Zoller established the Attila Zoller Jazz Clinics of Vermont in 1974. Zoller was incorporated in 1985, and the clinics were renamed the Vermont Jazz Center. He was a performing artist in the U.S. until the end. He recorded many albums with musicians such as Vibist Wolfgang Lackerschmidt, guitarist Jimmy Raney and long-time collaborators Konitz, Friedman, during the 1980s and 1990s. Zoller was also an electronic instrument designer. In 1971, he invented a bidirectional pickup for guitars and helped to design his own line of guitars. A line of strings was also created by Zoller for LaBella. Zoller’s last gig was at New York’s Zinc Bar on January 6, 1998 with pianist Tommy Flanagan, and bassist George Mraz. The trio recorded the following day. Three weeks later, Zoller succumbed to colon cancer. Allmusic