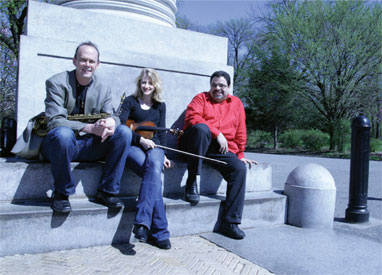 Over the years, jazz has been mixed with many different types of world music. You could talk for hours about Chick Corea and Stan Getz’s interests in Brazilian music, Dizzy’s Afro-Cuban achievements, or how McCoy Tyner bravely incorporated Indian, Middle Eastern and Asian music onto his classic modal albums from the early 1970s. One thing that has not received much attention in jazz is Celtic music. The Auction Project, a 2010 acoustic postbop recording with strong Celtic influences (Irish and Scottish), certainly stands out from other post-bop recordings made in 2010. This David Bixler/Arturo O’Farrill CD is not mistaken for an album by The Chieftains. However, the Auction Project is certainly not a straight-ahead Celtic record. Alto saxman Bixler is joined by pianist O’Farrill, guitarist Carlo Derosa and drummer Vince Cherico. They combine acoustic and Celtic post-bop elements on Bixler originals, as well as unusual arrangements of traditional songs like “She Moves Through the Fair,” “Banish Misfortune,” or “The Chicken Went To Scotland”. Certainly, that post-bop/Celtic/Afro-Cuban mixture isn’t something one hears every day in jazz, but it works well on The Auction Project –and the musicians bring out the Celtic element without being nearly as sentimental as traditional Celtic recordings are known for being. The Auction Project is probably too cerebral for many people who are serious about hardcore Celtic bands like Altan, the Chieftains, and the Clancy Brothers. This is a fascinating effort that experimental jazz lovers should not overlook. Allmusic