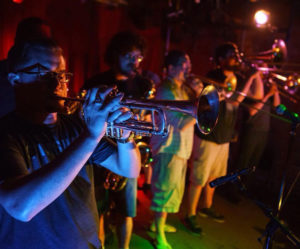 Audacity Brass Band, a ten-piece “new wave” New Orleans Style party group with a funk-fusion twist, is the Audacity Brass Band. ABB was founded in Farmville, VA. It is now based in Richmond. ABB’s style includes all members writing. It is also influenced by rock, blues and traditional jazz. We love the unique flair Audacity brings to our shows. With the support of Longwood University musicians, Sam and Tyler started Charlottesville Fan Audacity in April 2014. After finding set musicians, the group began arranging and writing. Audacity spent their first two years in Farmville, Virginia, mostly near Longwood University. 2015 saw the release of Bourne Salty, ABB’s first ever recorded demo. You’ll be lucky to find that. Audacity Brass Band’s first album, A101, was released in 2016. They also received residencies at Farmville, Richmond, and Charlottesville, and began traveling outside the Central Virginia region. The band released The Salt Supremacy in January 2018. It featured their song “Brap Attack”. Audacity released their second full-length album, The Chemically Imbalanced on February 7, 2019. You can check the events below to find out when they will be #bringingthepartytoyou! from https://audacitybrassband.com