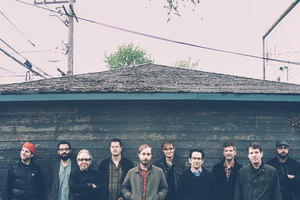 Audio One is Ken Vandermark’s latest large-group project. It follows his work with Resonance Ensemble and Territory Band. Vandermark started exploring the potential of compositions for extended ensembles improvisers in his Peter Brotzmann Chicago Tentet in 2017. He has been continuing to explore the dynamic and creative discourse that exists between composed and improvised musical material in groups of ten or more members since 1997. Audio One, unlike the Territory Band and Resonance Ensemble which were international groups, allows the band to rehearse and perform on a regular schedule. This is something that Vandermark was unable to do with his large ensembles. He has been able to freely express his influences through a variety of composing techniques and strategies. Jason Adasiewicz – vibraphone Josh Berman – cornet Jeb Bishop – trombone Tim Daisy – drums Nick Macri – bass Nick Mazzarella – alto saxophone Jen Paulson – vola Dave Rempis – saxophones Ken Vandermark – reeds Mars Williams – reeds from http://www.constellation-chicago.com