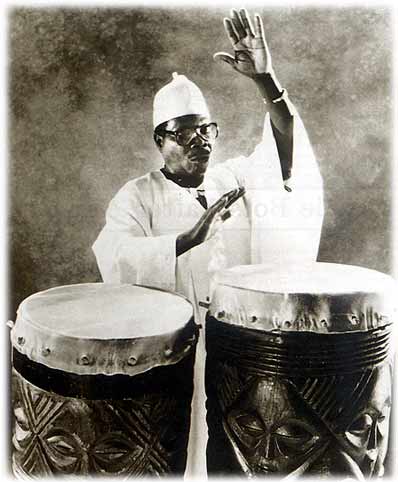 Babatunde Olatunji, a talented drummer, was a star in the 1960s thanks to his recordings of traditional Nigerian drumming. Today, Olatunji would face more scrutiny and evaluation about his authenticity than he was in the 1960s. Drums of Passion was not the groundbreaking album that many claimed. These were great LPs but they also had a lot of show business and sanitized play that would be well-recognized today, especially in the specialist press. His albums were reportedly influential on John Coltrane. They were one of the few international albums that not only reached the top charts but remained there for many years. In his prime, Olatunji did not make many albums. He had four hits LPs between 1964 and 1967. In the early 1960s, he had originally arrived in America to study medicine. Olatunji started a group of African expatriates to help one another avoid becoming homesick. He became a musician after the group had a hit record. Drums of Passion and More Drums of Passion were popular before the ’60s black nationalism movement and Afrocentricity of ’80s and 1990s. Although they had some influence in jazz circles, they were not as important as the Afro-Latin revolution started by Machito, Mario Bauza and Chano Pozo. In the late 1980s, Olatunji was reissued on Blue Heron’s label with The Beat Of My Drum. This release featured a 17-piece band featuring Carlos Santana as well as Airto Moreira. Rykodisc released more sessions, including a digital remix of the song “Drums of Passion.” He released Love Drum Talk on the Telarc label in 1997. After a long battle with diabetes, Babatunde Olatunji died in April 2003. All music