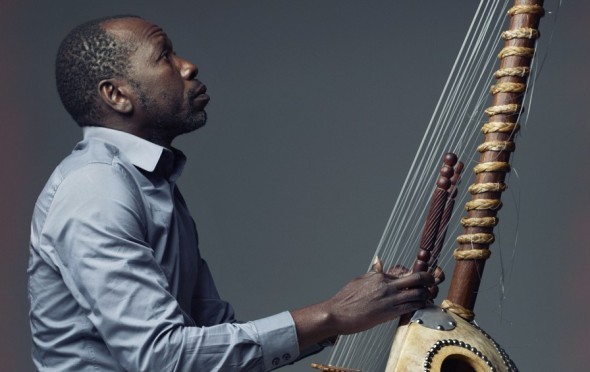 Ballake Sissoko, born 1968, is a well-known player of the kora. He has worked alongside Taj Mahal, Toumani Diabate, and many others. You can hear him on Diario Mali. Djelimady Sisoko, Ballake’s father was a well-known musician. Sissoko was the son of Djelimady Sissoko (a renowned griot), and began playing music at an early age. After playing in the Instrumental Ensemble of Mali and later with several female singers, Sissoko rose to prominence in 1981 with his duet with Toumani Dibate. He formed the trio Mande Tabolo in 2000 with a balafon and n’goni player. Tomora is his 2005 album. It features Toumani Dibate on kora and singers Alboulkadri Barry, Rokia Traore, and FangaDiawara as violin soloists of the Mali National Instrumental Ensemble. The French label No Format released Chamber Music, Vincent Segal’s collaboration record with him, a classical cellist best known for his bumcello work. American label Six Degrees Records. In 2013, he released At Peace, a solo album. Segal produced the album, and he plays on many tracks. From Wikipedia