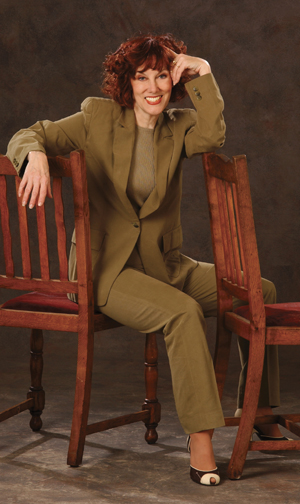 Banu (bah’new) Gibson is today a true star in her field. Banu, an outstanding jazz singer and swinging performer, is the only one in her generation to keep a strict adherence to songs from the 1920s, 1930s and 1940s. She mixes original renditions of Tin Pan Alley songs with jazz classics like Gershwin and Ellington. Her enthusiasm and showmanship make her a powerful force on the stage and on her CDs on Swing Out. Banu and her band recently appeared on Garrison Keillor’s award-winning NPR series A Prairie Home Companion. They were also the only guest artists at the Boston Pops Symphony Hall. They have headlined concerts, jazz festivals and parties across the country, including on television’s Entertainment Tonight, PBS’s Jazz From New Orleans, Joan Lunden’s Everyday, four times as American Public Radio’s featured vocalist on Riverwalk and Live From The Landing and at the 2001 Playboy Jazz Festival at The Hollywood Bowl. Banu has toured Europe with Wild Bill Davison, the fiery, legendary cornetist. She also performed with her band in Australia, England, Norway, Sweden, The Netherlands and Norway. Another highlight is Dick Hyman’s Jazz In July series New York City. Banu traveled to Vienna with David Boeddinghaus, her pianist/musical director. She also performed at the Palais Auersperg gala. Banu also toured Japan with The World’s Greatest Jazz Band. Charles Kuralt’s first chapter also features Banu. Banu and her band have expanded their audience’s exposure by performing with symphony orchestres. They have performed over 60 concerts with orchestras to date, including performances with symphony orchestras from St. Louis, Cincinnati and Indianapolis, Phoenix and Tucson, San Diego and New Orleans. Banu has a wide repertoire of songs that covers many of America’s greatest moments in popular music. Banu Gibson doesn’t just copy the past; she is a creative artist who pushes the boundaries of the genre and invents new, imaginative ways to bring life to timeless, memorable music. Visit www.banugibson.com